On Rules and Flouting the Rules

On Rules and Flouting the Rules

There is a quote attributed to the Dalai Lama that goes like this:

“Know the rules well, so you can break them effectively.”

I generally agree with this sentiment. I’ve seen it applied beautifully to music and painting, and I personally break the principle rule of photography with gusto every chance I get.

The one area that I get a little persnickety about breaking the rules is the discipline of spelling and grammar.

In this area, I get out my schoolmarm glasses and become VERY strict.

I believe that both effective communication and indeed, the very fabric of the English language, depends on proper grammar and spelling.

Despite, of course, the daily assault on the English language lobbed by the texting/twittering/facebooking phenomenon.

I recently read the bestselling book, “The Particular Sadness of Lemon Cake” by Aimee Bender.

It’s a sad, melancholy tale of a young girl who can taste the emotions of the person who prepared the food she eats. It’s an odd and slightly surreal book that delves deeply into the secrets and strange predilections of the family at the center of the story.

But as I dived into the book, I was brought up short right away by the complete lack of quotation marks to designate dialogue.

You know, dialogue is bit tough to follow when there are no quotation marks. Indeed Ms. Bender didn’t even follow standard dialogue format as often the sentences spoken between characters overlapped in a single paragraph.

I found it maddening and it made my progress through the book slow and rather difficult. I often had to re-read pages to be sure I knew what was going on.

I did get through the book, however, because Ms. Bender is a teller of beautiful stories.

There is a book that also eschewed quotation marks that I tried to read ten or twelve years ago that didn’t fare as well. In fact, I got a third of the way through the infernal book then got up the moment I’d had enough, got in my car, went to the library and dropped the blasted book into the donation slot. Literally. I got so mad I hesitated not a moment before I ejected the book from my home.

That book is one you might know, “All The Pretty Horses” by Cormac McCarthy. Mr. McCarthy may be an award-winning author, but he’s no favorite of mine.

Mr. McCarthy’s style on display in his recent spate of bestselling books may be something of a driver to this now popular style of throwing out useful punctuation marks.

To be blunt, I blame McCarthy for the trend.

However, my blame may be poorly placed.

Recently The Good Man and I watched a documentary called “It/ll Be Better Tomorrow” about the author Hubert Selby Jr. Known best for his books “Last Exit to Brooklyn” and “Requiem for a Dream,” over his career, Mr. Selby also flagrantly violated the rules of punctuation, most notably his apostrophes are replaced with slashes. So she’ll becomes she/ll.

However, at least he’s consistent in his use, and there is some sort of mark designating what’s (or what/s) going on, so I can at least follow along.

Not so with ol’ Cormac.

It seems I’m not the only one who has noticed this literary shift.

In an October 2008 essay in the Wall Street Journal, author Lionel Shriver also notes the lack of quotation marks, quoting material from McCarthy’s “No Country For Old Men” by way of example, but McCarthy is far from the only author out there employing this device.

To me, it feels indulgent on the part of the writer to expect that their readers will simply figure it out for themselves.

I think Mr. Shriver sums it up quite nicely at the end of his essay:

“When dialogue makes no sound, the only character who really gets to talk is the writer.”

And the thing is, as a writer, I’ve always thought my job was to get out of the way.

Ah well, as NewMexiKen and I discussed in the comments section of this post, art can be a tricky thing to define. The rules go all slidey* when we talk about what is or isn’t acceptable in creating works of art.

That means I get to keep my punctuation marks and while others can set theirs free.
.
.
.

Oh…and then there is the inappropriate use of quotation marks. That’s a whole other discussion. 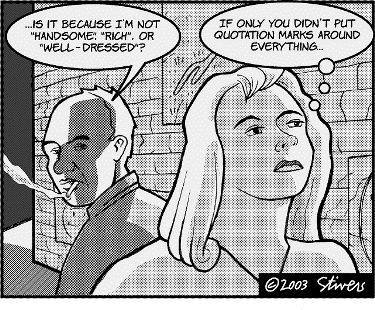 *Also there is my personal habit of making up words. Ah well, back to throwing stones at my own glass house…