He was inordinately fond of jokes, anecdotes, and stories. He loved to hear them, and still more to tell them himself out of the inexhaustible supply provided by his good memory…the coarser the joke, the lower the anecdote, and the more risky the story, the more he enjoyed them…

He possessed, moreover, a singular ingenuity in bringing about occasions in conversation for indulgences of this kind.

Reporter Henry Villard is discussing the tendency of his interview subject to tell bawdy jokes and stories, and to invent many occasions in conversation to insert his inexhaustible supply of coarse humor.

Sounds like a fun guy. The kind of guy I’d like to have a beer with. I do love coarse humor.

This guy certainly does not, however, sound like a good political candidate. In this internet era of “always on,” deep political gasping happens when a candidate so much as tap dances on a very wide line of humor. A candidate who inserts risky stories into conversation with a journalist from a widely read publication would not last long in this modern political atmosphere. We’ve seen a couple try and they have ended up becoming a footnote, a forgotten punchline and a big political loser.

In this instance, the year was 1858, the publication was The Atlantic, and the candidate for Senate being interviewed was none other than Abraham Lincoln.

In ways I can’t fully explain, it kind of cheers me up to know that Lincoln loved a good dirty joke. I knew he was a bit of an awkward man and was prone to being a “high talker” when he’s get worked up. But until today I didn’t know he had a penchant for bawdy humor.

I’ll never look at a penny the same way. 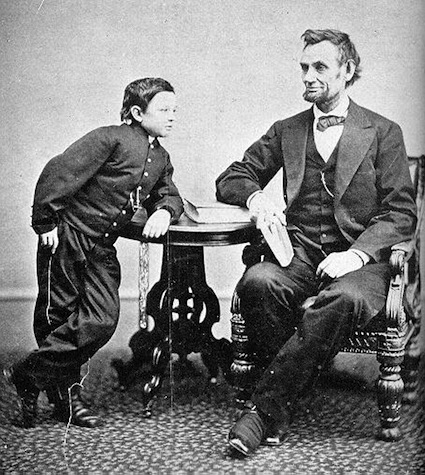 “Tell me another fart joke, father.”
Abraham Lincoln and his son Tad.

Quote from “Recollections of Lincoln” by Henry Villard published in February 1904 in The Atlantic magazine.