Learning The Language In a Foreign Country

Learning The Language In a Foreign Country

(Because you *knew* there was going to be a however)

This is a pretty old school type of company. Because they are so old fashioned, I’ve discovered in my short time here that the straight faced usage of corporate buzz-words is rampant.

Rampant. (just needed to emphasize that)

I would imagine these days that one couldn’t work anywhere and NOT run across the ol’ popular buzzwords, but it’s especially bad here.

“Low hanging fruit,” for example, is one of my all time least favorite expressions. I first heard it back in 1994 in Albuquerque. Yes, I remember the moment I first heard this ridiculous phrase, because I had an immediate “why would you say that” reaction to it.

Guess what I hear just about daily here in the Bay Area in 2010? Yep.

“Think outside the box” still has life.

“Think inside the box” is fairly new, and it’s bandied about a bit. It means, roughly, the old way may not be so bad anymore. (Funny how, in a financial crisis, everyone turns back to the textbooks as a way to bail themselves out.)

“That’s powerful” is one I wish wasn’t taking on life, but it is. Example: “We wrote up the workflow for that process and posted it on line. It’s very powerful.”

My super executive boss type guy dropped a “let’s form a Tiger Team” on me two days ago.

Ok. Remember Tiger Teams? I do. It was the year 1997 and I worked for Lockheed. We paid an outside consultant A LOT of money to help us form a Tiger Team to figure out why every meeting we had descended into yelling at each other.

Turns out, we were just a team of very strong personalities from vastly different disciplines (procurement, engineering, marketing, etc) and the only way we could ever get anywhere was by arguing.

So the term “Tiger Team” really makes me twitch.

But by god, I’m on a newly formed Tiger Team here at work.

There is a new bit of jargon that seems to be catching on. I hate it. Oh I hate it. Almost as much as I hate “low hanging fruit.”

The phrase is….”set it and forget it.”

As in, “With that new reporting software, you can just set it and forget it. It’s so great!”

“Now that we’ve established pricing on that product, we can’t just set it and forget it. We have to keep checking the demand reports.”

So let me just say that while I’m a longtime fan of Ron Popeil and his Ronco commercials, I fully blame him for bringing this atrocity into my life.

Business people are seriously using a phrase from a dagblam infomercial for a @#$%ing chicken roaster!

The Good Man says he heard this phrase in use a few years back, and I believe him. It’s new to me and I sure as heck don’t want to set it, and now that everyone is using it, there’s no possible way I *can* forget it.

I guess “set it and forget it” is just a new square added to the buzzword bingo playing card.

There’d better be good prizes, because at this job, I’m gonna be winning (or is it losing) every day! 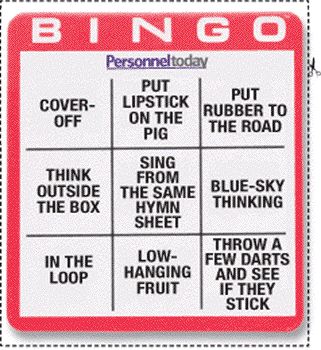