I have this nasty little problem.

‘Tis true. I don’t know why this is, I just seem to have a propensity for one moment standing, next moment I’m a tornado of arms and legs and I’m startled to be laying on the ground.

I’ve had times in my life when it was really, really bad. Especially right after I’d first moved to California.

I am a sensitive kid, and I do tend to get a little sensory overloaded. Moving to California all by my little lonesome could quite handily be filed under “a skosh overwhelming”.

In the first six months I lived here, almost daily I either locked my keys in the car or fell down, or both.

It usually happens when I’m a little too much up in my head, not feeling grounded, not paying attention.

The last big fall I took was last December. So see, I’m doing pretty good! I mean, I hardly ever fall down anymore.

I had a really smokin’ No Fall streak going…until Saturday.

There I was at the day field trip for my photography class. I was feeling *so* great because I was getting some amazing shots, feeling all artistic, and yes, I’ll say it, a little smug and self-satisfied with myself.

And so as I was leaving the Rodin Sculpture garden to scale the concrete steps leading into the Cantor Arts Center, I was smiling to myself, feeling happy, folding up my tripod, bopping along and then, as fate will do, I missed the top step, bobbled, and fell.

My tripod went clattering. My knee hit first, then my elbow, then my chin (oooh, took it on the chin!).

Then, somehow, gravity took over from its old friend momentum, and my legs were then flung askew and above me.

As The Good Man says, “When you can see the sky between your shoes, it’s not going to be a good day.”

I had the definite sensation that I was going to go clank-clanking down all the stairs. And I knew that would be a bad thing.

So I’m not sure what I did, but I was able to clench, or grab or lean or something, but I stopped my downward thunking progression.

I got myself upright again, and sat on that step, midway down the approximately fifteen-stair set of steps, and just…stopped.

I gazed out on the Rodin Sculpture Garden and shook my head.

My tripod was several feet away, my backpack was laying in the opposite direction, and the camera around my neck was still there, but the telephoto part of my very nice lens was stuck at an odd angle.

If I were skiing, they refer to that as a “yard sale.”

Thankfully, only my pride was seriously hurt. 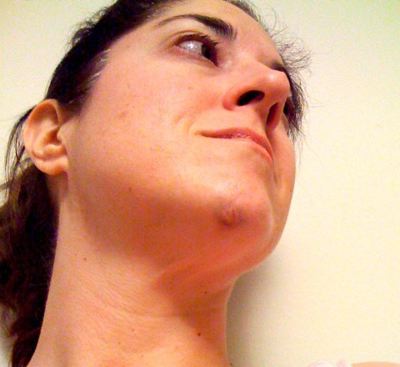 Sorry for the angle up the ol’ double cannons there. At least I don’t have crazy nose hair!