Over the holiday break, my lazy hind-end had the opportunity to watch a LOT more television than I usually do.

And since I watch sans a TiVo or similar device, I am subjected to all manner of commercials. The retail onslaught has been hard and heavy this year.

But sometimes, there is a commercial that rises above the rest.

It began with the repeated ads for a product called ShamWow.

But the commercial stood out more for the oddball guy making the pitch than for the product itself. I admit, it was, as they say in the marketing world, “sticky”. I can remember the product name off the top of my head, so it’s working.

Then a couple days ago, the ShamWow guy showed up in a new ad for something called a SlapChop. This product is a new and improved version of a good ol’ kitchen chopper.

Same guy, same accent, but he’s got a schtick working now. There he is, chopping away at a variety of items, telling us that the SlapChop is going to transform our lives.

Then he said something in the ad that caused The Good Man and I to stop all activity and look at each other.

“Did he really say that,” I asked, and TGM nodded.

What my new television pal Vince Offer said was:

“You’re going to love my nuts.”

He then showed how the SlapChop can decimate the nut of your choice to tiny bits.

Then later he also said, “Stop having a boring tuna.”

At first I was kind of put off by this Vince guy, but the more he shows up on my television screen (which is a LOT lately), the more I’m in this guy’s corner.

A quick Wikipedia glance makes for some good reading. (you’ve made it when you have a Wiki about you…right?)

I found a Slate article, and below is the best quote that sums up exactly what I wanted to say:

Can Vince become the next Billy Mays (of OxiClean and OrangeGlo fame)?

For now, let me just say this. You’re gonna love his nuts. 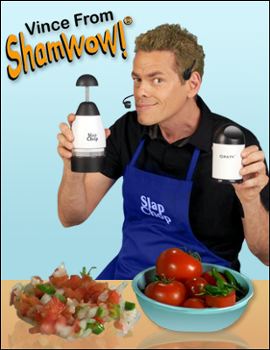