The times, they certainly are a’changing.

One place this is perfectly evident is in the world of newspapers and reporting.

A number of key dailies have either gone out of business or gone to internet only publication to cut printing costs. As these papers scale back, they must also downsize their staff.

Just last week, I was referring to something that Gene Grant had written about in his column (published in the Albuquerque Journal). I’d said that I had always liked Gene’s work, whether or not I always agreed with him.

I find him to be both eloquent and articulate. Something lacking in so many of today’s so-called journalists.

Just two days after I had been extolling Gene’s virtues, I read his last column for the ABQjournal.

Said Gene: “A small story in the historic and difficult choices newspaper owners and editors are facing. It’s tough out there.”

Gene and his opinion column have fallen victim to the world of the internet and the ever present blog-ready online world.

I love my blog and the forum to be able to openly express my opinions on a variety of topics, but I realize that the blogosphere has taken down talented journalists like Gene.

And I have conflicted feelings on that subject.

On the one hand, I lament the lack of real journalism with integrity and reporting “just the facts.” This is, I know, an antiquated notion. Opinion has made its way into the media, as each paper has its own axe to grind. My own local rag, the San Francisco Chronicle, is one of the worst.

So although I wish for strong, precise journalism, it just doesn’t exist anymore.

Then again, on the other hand, I think the rise of blogging is a good thing. No longer am I subjected to only the forced opinions of my local paper or other media outlets. I can seek out a variety of dissenting opinions, take them all in, and then make up my own mind. Knowledge is power.

I wonder if blogging wouldn’t be quite the force it is if our journalistic outlets gave us the unbiased news we desire? Or perhaps it would be popular, but in a different way.

So while I’m sad to see the demise of newspapers and the downsizing of talented writers like Gene Grant, I think it was inevitable.

The newspaper world is a stodgy old industry and it’s high time for that old dog to learn some new tricks.

Change or die is the motto these days. Newspapers aren’t immune.

Something tells me 2009 is going to be a wild ride. 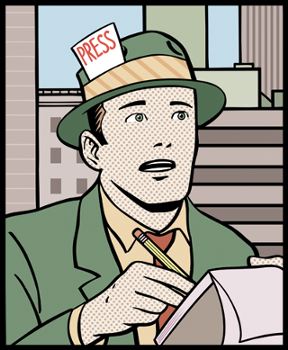