Inauspicious start to the week

Inauspicious start to the week

As mentioned before in these pages before, I have become a full blown commuter, taking a train and shuttle bus to get to and from work.

It’s one of those “when it works, it works great” type of deals. To be honest, the whole thing usually just works. Easy. Since my company subsidizes the cost of using commute alternatives, I can ease my pocketbook from the pinch of $4 gas.

However, this morning was one of those days where it didn’t work. Oh, all seemed fine. I walked to the station. The train arrived on time. I climbed on. Hey, I even got a good seat!

Then I overhead the conductor on his cell phone. “Hit, huh? At Menlo Park? Ok. Delays of up to an hour. Ok, I’ll make the announcement.”

Yup. The train in front of us hit a pedestrian. And since dancing with a train never goes well, the whole operation had to come to a halt.

My train stopped at a station that was just far enough from both home and work as to be troubling. The conductor told us to get off and figure out what bus to use or whatever. Ugh.

With a cell phone on the last vapors of battery charge, I called a cab and paid an inordinate amount of cash to make it in to work about an hour late.

In other, better, news, I’m happy to see in the ABQjournal that it’s official as of today, the New Mexico quarter is OUT. If you are in Santa Fe, there’s even a little ceremony. 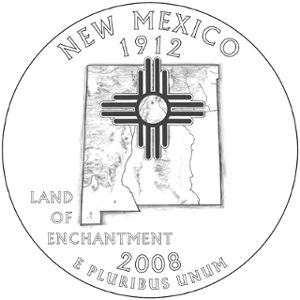