This is not my beautiful spice cabinet: 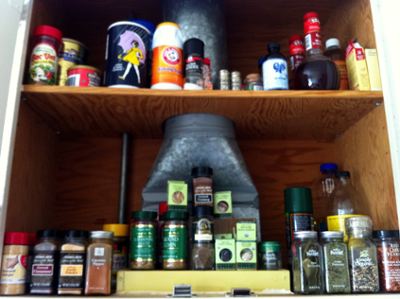 Ok, well, it’s my spice cabinet now. See, I prefer a generally chaotic method of organizing spices. Roughly, the flavors I use a lot are toward the front. The spices I use less frequently are toward the back.

I always know, without having to think, where each spice is located. I open the door, reach in, grab what I need, shake enough into the pan on the stove, then put it back.

Top shelf, randomly speaking, is for baking stuff like vanilla and almond extract. Lower shelf front holds the salt, cumin, garlic, etc. The everyday stuff. The nutmeg is tucked over in the back right corner. Dill is in the middle right. Cocoa powder is top shelf, to the left.

See what I’m saying? Bing, bang, boom, I know where everything is.

That was all well and good until I married The Man Who Checks Expiration Dates. Or, perhaps more aptly named: Food Safety Man.

My darling one is quite diligent about checking the “use by” dates on all food in the house. When he moved in with me, he was horrified to go through my cabinets. He would bring a can or container of something to me and say, “do you realize that this expired in 1996? That means you brought it from New Mexico when it was already expired!” When he said that to me, the year was 2007. Heh.

Yeah. Well. Ok. I *might* be guilty of a teeny bit of hanging on to stuff too long. My beloved sister has had many talks with me over the course of my adult life about “just let it go.” Blame being raised by parents who remember the Great Depression, I suppose. I’d like to consider myself to be…frugal. Really, if I’m to be honest, I’m just too freaking lazy.

And so, when my sweetest went through my cabinets and threw out, oh, about 60% of what was in there…I was mildly annoyed, but I got over it. I’ve become better accustomed to his weekly (if not more frequent) going through and rearranging the fridge, throwing things out and front facing all the remaining contents. So much for my grab and go approach there, too.

And now this…my spice rack. The spices that are the heart and soul of my cooking! He did this yesterday while he was making something for dinner, so I guess I can’t really complain that loudly. But still…I heard him rustling around in there and had to sit, take several deep breaths, rake a Zen garden, chant a mantra, and play a sitar.

I gotta say, it looks pretty good now. I can’t find anything, but I’ll learn. And just as soon as I have the new organization system down, he’ll organize it again.

The spice rack was pretty tough to take, but there was something worse. I almost packed my bags when he organized….(I can hardly even say it)….my toolbox. This was a violation most egregious. My toolbox! And let me just tell you this…I have more and better tools than he does! Now that we’re married, a comingling of the tools has occurred and I may never be the same again.

Oh the horrors of community property!

Marriage is weird. Maybe this is why people usually get hitched so young. It’s easier to manage when they haven’t gotten all old and set in their ways.

Really, all this organizing and changing up my routine is probably good for me.

Just don’t tell The Good Man I said so.

I realized, belatedly, that this might just be the perfect follow up to the previous post about variety being the spice of life. Unintentional, I assure you. One of those happy coincidence type of a deals.