Oh hell, I did NOT just reference Van Halen for today’s Theme Thursday topic of jump, did I?

The topic of jumping has been on my mind lately. The Good Man and I have been discussing this in hushed and worried tones.

You might remember this post from back in May where I described the miracle of my betta fish named Benito. Bubba almost died on us, but he was miraculously saved by The Good Man.

After that rough spot, our little Benito thrived but was fairly timid. The Good Man did some reading up and found that a male betta will become more aggressive as he becomes comfortable with his surroundings.

Well, we’ve had Benito for nine months now and Mr Fish has become VERY comfy in his own little fish house.

So comfy that he’s become a very naughty fish.

When we feed him, he loves to make sport of it. He’ll leap at the food nuggets like he’s got Jaws-like delusions of grandeur.

He’ll hide back behind his heater, and when I drop a pellet and then point to it with my finger, he’ll come charging out ignoring the food pellet and leap to bite my finger.

I swear I hear a tiny “rowrrrr” every time he nips my finger.

Feeding him has become a chore because he’s too busy trying to bite me or do a flying leap onto the food pellet that he misses the damn thing and has to chase it around the bowl.

The Good Man thinks this is funny and encourages him, making his own “rowrr” sounds. Must be a guy thing….

Anyhow, the other day, The Good Man was on feeding duty and he had the packet of pellets in his hand. TGM turned to say something to me, and when he turned back, Benito had jumped clean out of the water and landed on the table.

He’d seen the pellet pack and his buddy TGM and it was ON!

We scooped Benito up and put him back in his bowl and he’s no worse for the wear, and no less ready to leap for his food pellets.

We have to keep his water level a bit low and keep the lid down so we can contain his exuberance. I knew that bettas were notorious jumpers, but come oooon.

An aside for you fish folks who might question: yes, we tested to be sure he wasn’t leaping because his water was ammoniated. Nope, he was just being naughty.

This morning I decided to try to take a photo of my little fish. Having the camera near the bowl stresses him out, so I try not to do it very often or for a very long at a time. Plus, he’s a fast little bugger and hard to photograph.

But here is my little bubba fish (terrible angle, makes him look huge!). Don’t be fooled by the cute eyes…he’s ready to jump. He’d already flared at the camera and leapt at my fingers by this point.

Boys can be so rude! Our other little fish Margaret is such a sweet little girl and easy to feed.

Not so with this troublemaker: 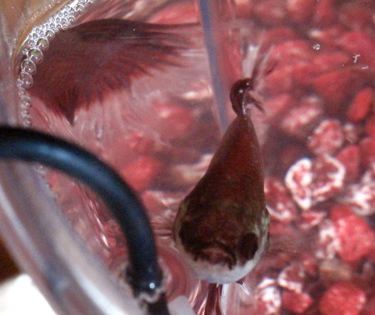