As I was growing up, my mom, bless her soul, had some pretty strong aspirations for her daughters. Mainly, she wanted both my sister and me to be strong, healthy and graceful girls.

This is an admirable wish.

So to that end, both my sissy and I attended dance classes regularly, learning ballet, tap and jazz (yes, I learned how to make perfect jazz hands).

Blessed from an early age with sturdy thighs and broad German hips, I was what might be called “stocky.” This whole dancing thing was a bit tougher for me than it was for the lithe little girls who also attended the dance classes.

That said, I danced and it was not so bad. I was a damn fine tap dancer in my day, actually. I could shuffle-off-to-buffalo like nobody’s business! (Google it, that’s actually a tap dancing term)

At some point, I don’t know how it came about, but it was agreed that I would start taking gymnastics classes at the local YMCA.

Well, this was quite a step up in the game. Gymnastics! Whoa!

Ok, let’s go back to the sturdy thighs and broad German hips thing…my center of gravity is rather low. This is a good thing for lifting things and staying on the planet.

However, that “staying on the planet” aspect is quite the hindrance to the goal of gymnastics activities which often involve leaving the ground.

In hindsight, I did ok on balance beam. I was actually not that bad on the uneven bars.

But the floor routines were another story entirely.

Backbends. Sure. I’m all over them.

I’d come thundering down the mat, do the hop, attempt to flip forward and wind up lying on the mat in a tangled mess of limbs and lycra spandex.

Next I’d try to do that big hop and tuck to make a back flip work, and would end up in a similar state.

A back flip on the balance beam? Oh please, I never even tried.

It was kind of hard on the ol’ self esteem back then that all these other girls could flip through the air with the greatest of ease while I stayed firmly grounded.

Over the years I’ve become a bit more circumspect. Gravity is one of those laws that, unless you are an astronaut, you just can’t break. These days I tend to allow all due deference to that bitchy Mistress Gravity. She’s always going to win. 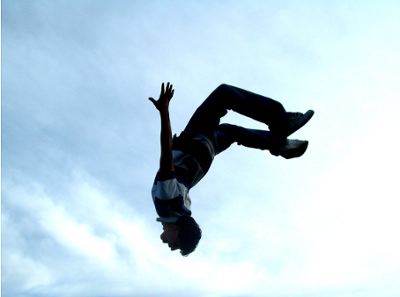 
Photo by Charlie Balch and used royalty free from stock.xchng.