It was Fall, had to be. Slight crispness to the evening air. Anticipation thick as the fog of Aqua Net in the Chi Omega house.

It was 1989, probably. Or somewhere close to that. The campus of New Mexico State University. I was a sophomore, maybe a junior, I can’t remember. Doesn’t matter.

What does matter is that I was getting ready to go to a dance at Corbett Center.

The woman who would become my best friend for what is now over twenty years was the driving force that night, and many just like it. Her parents had met at a Corbett Center dance, so she was especially incentivized to go scoot a boot and see what’s doing. Family history.

I nervously pulled on my too shiny, too new, gray goatskin round toe ropers and jeans that didn’t really go with the boots, but were at least long enough to be acceptable. “You should buy some Rockies,” I was told, and they were right. I would, later, in quantity. But then I had neither the money nor the courage. I wasn’t sure what I was going to get into, I just knew I was going to be there come hell or high water.

It wasn’t my first Corbett dance. It wouldn’t be my last. This story isn’t about one actual night, more an amalgam of a lot of great nights.

The gaggle of high-haired women walked out the back door of our home, a sorority house containing twenty-eight women of different backgrounds, and one understanding house mom. What bound us together was our choice of educational institution. A land grant institution. To the uninformed, that means an agricultural college.

It was a short shuffle over to Corbett, up the stairs to the third floor where they had the ballrooms. Pay the entrance fee. Five dollars I think? Maybe less back then. Get a stamp on your hand. Look around, see who is there already. Talk about who you hope shows up.

They were our people, and we embraced them. And we danced. Oh did we dance.

The two-step. Not the Texas double up kind, no. The slow kind, keeping time to the music.

And a waltz. My favorite, how I love to waltz. The rhythm of waltz-timed music still beats my heart a little differently.

The polka. If done right with the right boy (he had to be tall because I’m tall and otherwise we’d just bump knees) you felt like you were flying, feet hardly touching the ground.

Then of course the Cotton-Eyed Joe (stepped in what?) and the Schottische, played back to back, often enough. Linking six or eight of us, arm in arm, facing forward, laughing our fool heads off.

The ladies, my friends and I, would stand on the sidelines and take a look at the scene. My best friend would always get asked to dance first. She’s beautiful and a great dancer. Who could blame the boys for flocking to her blue-eyed, dark haired gorgeousness? Not me, for sure.

As I got better at dancing, I got asked often enough, too. The boys liked the girls who could dance, who liked to dance, who didn’t turn up their nose at dirty fingernails and cow sh*t on their boots.

There is something special about dancing with a boy who knows how to dance, a strong lead, who looked you in the eyes while we danced. The boys who had the right fold in their hat and smelled faintly of Copenhagen and beer and Polo cologne.

I got to know those folks. All of them, the boys, the girls, the dancers, the musicians, the laughers, the people who liked to swing each other around the dance floor.

They became my family. We traveled in packs, dancing until we were sweaty, then heading outside into the cool air to take a breath, drink a beer, laugh a lot and occasionally find someone to spend a little time with.

Well not me, not then. I was still too awkward and mixed up to attract much in the way of boys at that point. I was more “one of the guys” than one of the girls the guys would chase. Don’t feel bad for me though, I eventually figured it out. (cover your eyes, mom)

Over time, we all aged a little, got to be over 21 and started to migrate from dancing at Corbett center to dancing at the local country bar. It was fun but seemed a little more complicated. Add more than a couple beers to the night and weird things happen.

But still we danced. By that time, I’d moved off campus and lived with my friend from TorC. She was crazy and fun and taught me a lot (cover your eyes, mom), and she loved to dance as much as I did. She coined the phrase “big bar hair” and learned me how to get it, and keep it, despite dancing so hard sweat ran down your face.

Then we all aged a bit more, and we graduated and found respectable jobs. My best friend, her husband (a fine dancer, I must say) and I are all actually employed in the same area that’s listed on our diplomas. One might scoff at country folks, but all three of us hold a Master’s degree in our chosen fields.

Now, on the verge of turning forty, I find I still miss those days, mightily. I wished I’d enjoyed them more at the time. The stress of school and classes and “what do I want to be when I grow up” cast a pall on my days.

My own fault. A worrier by nature, a tendency I fight tooth and nail every single day I take a breath.

When I’m having a bad day, when I doubt myself, when I realize I don’t fit in at my new place of employment, when I don’t feel heard or understood or very well liked, I can always go back to those days in my mind and smile.

I can’t get together with my best friend and her husband and NOT talk about those days. Magical. I’m blessed to have been able to have them. Once upon a time, I knew where I belonged.

(photo found via Google. That is, in fact, Mark Delk and if I’m right, that photo was taken at Dickerson’s Auction Barn…another location for a lot of good nights of dancing….) 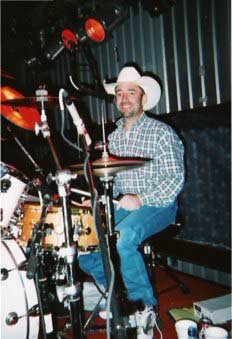 This historic journey brought to you by the song “On A Good Night” by Wade Hayes. The song popped up on my iPod set to shuffle during the morning commute. The song itself was burned off a CD while visiting my best good friend in the world just a couple months ago. Damn you Wade for putting me in the wayback machine!