*With all due homage to the Steve Martin classic. “He gave his life for tourism.”

This past weekend, while my best girlfriend was in town, the three of us (The Good Man, The Friend, and me) went over to San Francisco’s De Young museum to see the King Tut exhibition.

This marked a 30-year anniversary for the De Young, as they also showed King Tut artifacts back in 1979. I remember the hubbub about Tut back in the day (and listened to the Steve Martin song on the album owned by my big brother).

Of course, the Tut traveling show never made it anywhere near New Mexico, so I was pretty psyched to see it this go ’round.

In short, it was amazing. I would love you show you photographs, a drawing, a pencil sketch, my notes or ANYTHING from that visit, but all of that is prohibited. *sigh*

After the exhibit, the three of us headed over to the historic Japanese Tea Garden located next door to the De Young, and while sipping tea in quiet surroundings, we talked about the Tut exhibit and our impressions.

Here’s where my train of thought was headed…..

Ok, so this whole funerary thing…they create these surroundings to make it nice for the person in the afterlife. There are chairs and other furniture, cosmetics, hair care items (gotta look good), and clothing. Favored toys, games, and pets also included.

Basically, all the stuff the deceased liked so they would have a happy, restful afterlife.

And so, with this in mind, I determined my tomb would be, on the inner sanctum, a replica of the red couch, with a fine yet tubby statute of my Feline at my side, or rather, on my legs.

And cheesy poofs. Lots and lots of cheesy poofs (I’m thinking they can use carnelian to properly capture the vibrant orange cheesiness).

My friend pointed out that we had to work out my regal name. As the Egyptian royalty ascended to leadership, their name was changed.

As we learned in the exhibit, the naming convention is something like:

And so my name would have to be something like:

And yet, we also realized that sometimes, on the cartouche, the name is actually represented in the other direction.

Also, in the funerary tomb, there are these little figurines placed about. They are called shabti, and their whole gig is to be the servants for the deceased in the afterlife. So, like, if there is manual labor to be done, the shabti have to step up.

Well, I thought on it, and then was all like, “you know, I think my shabti should be all my bad bosses through the years….put those b*stards to work for ME!”

The Good Man and The Friend were *way* in favor of this idea.

However, the more I thought on it, the more I realized I don’t really want all of those bad bosses to hang out with me for all eternity. The good bosses (there have been plenty) are welcome, but why would I want the yuck around? We want a happy afterlife.

So what I need instead is a jar like this one (that we saw at the exhibit).

See, the tiger on top represents Tut…so on mine it would be…uh…a sloth. Anyhow, so there the sloth lays, all smug looking, and then at the bottom would be carved heads of my former oppressors managers (see the photo, heads of Tut’s enemies are found at the foot of the jar).

Instead, my shabti can just be really cool but hardworking people who, like, want to shag glasses of lemonade and make guacamole and are willing to get up a game of softball every now and again.

Ok, so we’ve got a good start on this whole afterlife plan….

Now I need to find someone to begin carving images of me. I need to be depicted throughout the years. I’m thinking all this carving and painting and gilding might take a while.

That’s ok, I can wait. Also, I’d like them not to take my brain out through my nose if we can at all avoid it, mmmkay? 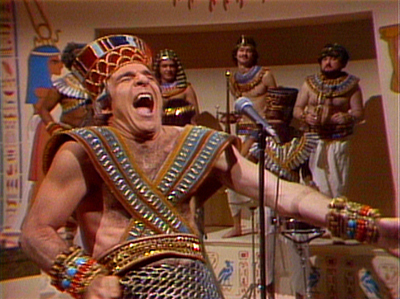