My new commute is bringing me lots of new things to look at and new sights I’ve either not seen before or haven’t seen in a real long time.

I’m starting to figure out which side of the train to sit on to take in some of the coolest views on the journey.

One of my favorite parts of the ride is emerging from the tunnel on the Oakland side. Now, Oakland gets such a bad rap, but I find much of Oakland quite beautiful. (No city is 100% beautiful)

In fact, going home each night, I love to sit on the left side of BART so I can take in some gorgeous sunsets over the Port of Oakland.

Here is a photo I snapped with my iPhone from a moving train: 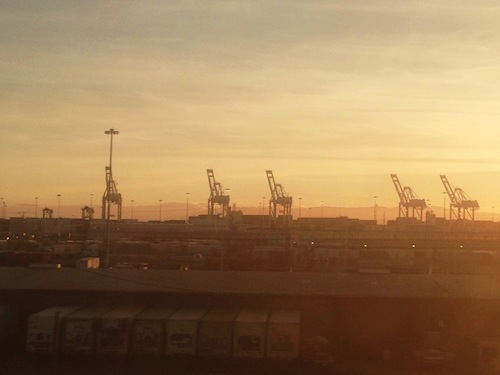 Image Copyright 2013, Karen Fayeth, and subject to the Creative Commons license in the right column of this page.

I love this photo. What you are seeing here are the shipping container cranes at the Oakland docks. Often compared to At-Ats, I think these are some of the most fascinating machinery I’ve ever seen.

I recall when the first of these cranes were purchased several years ago. They came in on a ship from Asia and were so huge, there was much worry about bringing them in under the both the Golden Gate Bridge and Bay Bridge. One big wave swell would have spelled millions in damages. They made it through safely and now many more have come to take their place, revolutionizing how Oakland moves cargo.

This is how you get your stuff, man! Pretty cool.

These cranes make fast work of unloading big metal boxes of goods from the incoming freighter ships. Every morning through the BART windows I see eighteen wheelers lined up ready to get their payload so they can haul it off to the four corners of the state and country.

The Port of Oakland is the fourth busiest container port in the U.S. Their efficiency is amazing.

And those big beautiful industrial pieces of equipment are fascinating. When silhouetted against the setting sun they are so alien and yes, so incredibly gorgeous.

They are modern and very functional art.