Today’s word from the random word generator is: disgust

Owen squinted his left eye in a perfect imitation of his father, and with his right eye, he looked down the sights of his brand new .30-30 Winchester rifle. He didn’t see anything yet, but he wanted to be ready, just in case.

Holding the butt of the rifle to his shoulder then squinting down the scope didn’t feel natural yet, and so he kept practicing the move.

He absolutely didn’t want to mess this up.

His dad was lecturing him on how to spot deer, how to stay hidden, how to stay downwind and Owen was listening, but also practicing. He knew that his chance to shoot his first deer would come quick and he needed to be ready. His dad was counting on him and he was counting on himself to be that kind of guy. The man who can confidently get a shot off in a hurried situation.

At twelve, this was a key day in his life and he knew it.

Owen turned his head and looked at his dad, decked out from head to toe in camouflage, smelling of the doe urine he’d applied to cover up his human scent, breath reeking of Budweiser.

There was no one in the world Owen looked up to more than his dad. He wanted to be just like him when he grew up, from the day old stubble to the low rough voice.

Owen wasn’t the only one who looked up to Hal who was a born leader and natural teacher. Hal was that guy everybody either wanted to be or be friends with.

“Ok, now, stay quiet and don’t move,” Hal instructed in a low voice. “We got what looks like a three-point buck headed into this meadow. Get ready, ok?”

Eyes wide, Owen looked where his dad pointed. Sure enough a tawny deer came into the clearing, foraging in the grass, oblivious to the fate that awaited him behind the brush.

“Real easy, son, make sure you look careful down that scope. What you are looking to do is drop that buck with one shot. Do you think you can do that?”

His insides wobbled, no.

He couldn’t stop his hands from shaking as they held his rifle, which now seemed impossibly heavy in his hands.

He braced the wooden butt of the gun up against his shoulder. Immediately his muscles tensed in anticipation of the kick that rifle would deliver when the trigger was pulled.

Owen took in a long quiet breath, willing his muscles to relax.

“Ok, now, you get it in your sights, right behind that front leg. You’re aiming for the heart, got it?”

He carefully found the area on that deer that he was pretty sure his dad was talking about. He tried desperately to keep his hands still and to focus.

“When you’re ready,” Hal whispered, “Just do it like we practiced. Take a breath in and then let it out slowly. Stay calm and squeeze that trigger.”

Owen gave a small nod and focused. He drew in a breath and exhaled. About halfway through the out breath, he put his finger on the trigger, giving up a silent prayer that he did this right.

He imagined his dad congratulating him on his first deer. It was a rite of passage. Today he would go from little kid to a man.

Owen was ready. He couldn’t be a man fast enough for his tastes.

The buck moved a little bit, turning his side more toward where Owen and Hal were well hidden. It was a perfect shot and both man and boy knew it.

Owen changed his aim to the left just a little bit, tried to relax, took in another quiet breath and began to let it out.

“Go Owen or he’s gonna get away!” Hal said in a sharp whisper.

Then he pulled again, because nothing happened the first time.

The only sound was the click of an empty chamber.

“What the hell, son?” Hal whisper-shouted.

With knitted brows, Owen looked at his rifle. Suddenly he was scared to death the shell got caught in the chamber. That could be very dangerous.

“I don’t know dad!” Owen wailed, holding out his rifle. The sounds of running hoof beats echoed down the canyon.

“Goddamnit!” Hal now shouted, a look of disgust washing over his face. He snatched the gun from his son’s hands and pulled back the bolt to peek inside.

“Owen, why isn’t there a shell in this rifle?” Hal asked not keeping the sarcastic tone out of the question.

“Well ok, then give me one out of your pocket, let’s get this loaded and try again.”

Owen reached into the pocket of his Carhartt and found a used kleenix and a rock. His face turned even redder. The blush washed from down at the bottom of his feet up through his scalp.

He’d woken up early, before anyone else, and was so excited to go on his first hunt that he secured everything in the truck so they could head out. He packed everything carefully, including his box of shells, but completely forgot to put any in his gun. Or his pockets.

“So let me get this right, you left camp with a gun but no shells? What the hell were you thinking, boy?”

Owen paused. Then burst into tears.

The look of disgust quickly drained from Hal’s face at the sight of his young son in complete meltdown.

“It’s ok, Owen,” he said, and wrapped his giant arms around the boy. “We’ll get one tomorrow, ok? Let’s get back to camp. Wanna go into town for an ice cream?”

The boy was not yet a man, but the man still remembered what it was like to be a boy. 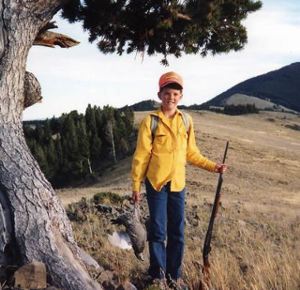