I wanted to take a minute to thank my usual readers for sticking with me through this week of a bit different sort of blog post.

I’m not going to lie to ya, this challenge has been a lot harder than I expected. I compete in contests where we have 48 hours to write a thousand word story, and even then, the time feels tight. I’ve been producing the stories this week in around five to six hours.

I’m pretty pleased so far. They all could do with more time and distance to allow for extra editing, but I’m not ashamed of anything I’ve written so far.

I hope at least a few of you are enjoying reading them as much as I am writing them.

My goal for this week has worked. I needed to shake things up to get back into my blogging head and it’s working. I’m looking forward to getting back into my groove next week.

Alex was on top of the world. Six months ago, he’d been promoted to Senior Director of Sales and he was rolling. He was the fair-haired boy employed at one of the fastest growing companies just shy of Fortune’s top 100.

Yesterday the Executive VP of Sales had called Alex personally to congratulate him on landing the biggest client in the history of Jackflash Software. The ink was barely dry on the deal.

Alex and his boys had properly celebrated the victory.

After just two hours of sleep, Alex now looked at himself up and down in the mirror because he knew he looked good. Not just “hey, that’s a nice suit” but “damn! You look GOOD in that Prada suit” sort of good.

Even his hair looked good and his eyes weren’t the slightest bit puffy. A little chin stubble told the tale, but hell, that would just make him look a little rugged today.

If asked, he could say he was up all night on an overseas call. They’d buy that.

This morning he had a date with the CEO of Jackflash, Bob Jackson. The invitation had come quite a few days before the new contract had settled and had been somewhat vague as to the agenda.

Jackflash was still a pretty small company, so meeting with the CEO wasn’t entirely unusual. Maybe there was another big deal in the works? Or maybe there was even a big bonus coming his way. He smiled at the thought. Oh so many toys like boats and cars he would buy…

Alex looked at himself in the mirror. “God, it’s a great day to be me,” he said to his reflection.

Turning from the mirror and picking up his car keys, he felt the burn from lack of sleep around his eyes. Unacceptable, he told his wavering body.

Revving the engine of his brighter-than-the-sun yellow Porsche, his first stop on the way into work was a 7-Eleven. Two Rockstar energy drinks should do the trick.

Alex was guzzling the second Rockstar when he parked and walked into the office. Burping loudly from the fizzy drink and tossing the can in the trash, he put on his winningest smile when he saw people in the lobby turn to look at him with nods and waves.

News must be out, he thought. But not everyone was smiling. Jealous, probably, he thought to himself.

He smiled and made like a politician. If there was a baby in the room, he would have kissed it.

After all the schmoozing and stopping by to talk to friends along the way, it took him a half hour to get from the front door to his office. His heart was trip hammering in his chest from all the caffeine and he couldn’t sit still. He glanced briefly at email and ignored the flashing message light on his phone.

A note was taped to his monitor. Terry, his boss, wanted to see him as soon as he came in. He checked his watch, 9:45. Terry was probably already in the day’s meetings, but he figured he’d give it a try.

Alex walked so fast to the elevators, the back of his jacket trailed out behind him like a little woolen cape.

“Hey Susan! Is she in?” Alex said, putting on his charming voice for Terry’s admin. Susan wielded all the power in the organization, including whether or not Alex flew first class, so he treaded lightly.

Susan looked at Alex with a face drained of blood. “No, Alex. She’s gone.”

“No. I mean gone. Fired.” Susan whispered the last word.

Alex checked the Rolex on his right wrist and noted he had five minutes to get upstairs to meet Bob.

“Ok, I’m going up,” Alex said, pointing toward the ceiling, the company recognized gesture to indicate Bob’s office on the top floor.

Susan was VP of Sales. If she was gone, and with Alex coming off such a huge victory…well, the writing was on the wall. He was going to get promoted again.

Alone in the elevator, he did a little “yes!” fist pump dance/jig sort of a move.

When the elevator doors opened, he was met by Bob’s Admin, Charlene. “He’s here,” she said into her boss’ open office door, then with an out of character syrupy voice, “I believe Bob is ready for you. Go on in.”

Alex walked into the office with his head high, but faltered when he saw Ellen Banks, VP of Human Resources and Stan Ingersol, Jackflash General Counsel already seated at the conference table.

“Hello Stan,” he said, shaking the man’s hand, “Ellen,” he said, nodding. “Bob, how great to see you! You heard about the Techtron Telco deal, I assume?” Alex said, all smiles and sales training in his demeanor.

Alex was still grinning ear to ear when he sat down at the head of the table.

Alex drummed his fingers on the table impatiently and looked at Bob who turned instead to Stan. “How about you take the lead on this meeting?”

Stan cleared his throat and shuffled through the stack of paperwork in front of him. He found the page he needed and held it up.

“Alex, this is a copy of the resume you submitted when you applied to Jackflash.”

Alex leaned forward to squint at the document, then nodded.

“It was your representation at the time you were hired that you both attended and graduated from Yale School of Management. Your hiring manager failed to do a background check before extending the very generous offer. During a routine audit, Ellen’s team found the lapse in procedure and conducted the appropriate check.”

Alex swallowed. He knew what was coming next.

Visions of Masaratis stopped dancing in his head. 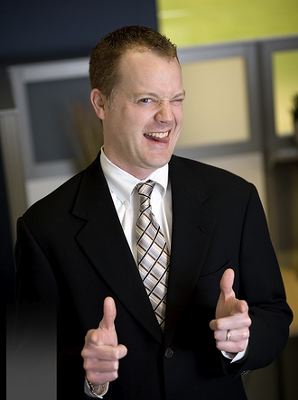