This weekend, I’m happy to announce, a dream of mine came to realization. And I’m still totally geeked out about it.

You’ll have to forgive me while I wax rhapsodic about this. It may mean little to you but it made my whole day, month, year…

As noted, I’m a fan of baseball. Lately I’ve been spending more time at the local minor league ballpark for the San Jose Giants. They are a single A affiliate of the San Francisco Giants.

Part of what makes minor league baseball so engaging is that the organization tries *really* hard to make it fun for the fans. For the first seven innings of the game, they provide entertainment in the form of contests and games that involve selected fans from the crowd.

They do things like “Putt For Cash” where the contestant tries to putt a golf ball into a kiddie pool. Another where a kid tries to whack a plastic hockey puck into a net that is guarded by an adult in full hockey goalie gear (Shark’s gear, naturally). There’s a rousing game of musical chairs, little kids doing “Dance for your Dinner” (the one that gets the crowd’s approval for their moves get a hot dog and a soda), and racing the mascot, Gigante.

But by far my favorite of all the games is called “Smash for Cash”. A big, old, belching panel truck is brought out onto the field. It sometimes rolls reluctantly. At one game it stalled twice before reaching its destination. Once arrived near the dugout, a blanket is laid under the front. Three San Jose players are recruited to pair with a fan. The player is handed two baseballs that he then hurls at the van in an attempt to smash out the headlights. If he succeeds, he gets $100 (no small change for a guy who makes maybe $6,000 a year) and the fan gets a gift certificate for dinner.

I *love* this game. LOVE IT. Love it most when you hear the distinctive sound of breaking glass, the headlight goes dark and the crowd goes wild.

In order to be chosen as one of the fans to participate, you have to have a scorecard with a printed number. If your number is chosen, you’re in.

I’ve been going to San Jose Giants games for ten years. Every time I go I long to be the one called to my favorite game. I clutch my number close to my chest and hope.

On Sunday, three numbers were put up on the scoreboard for Smash for Cash. None of the three were mine. Ah well, just another day at the yard.

If they don’t get quick response to the numbers, they choose new ones. So a couple innings later, two more numbers were on the scoreboard. This time, one of them was mine.

I leapt from my seat, got a kiss from my man, and literally ran to the press box to claim my rightful place in the Smash for Cash contest.

The guy in the press box was announcing the game, scoring the game, and running all the promotions. A very busy, but quite nice guy.

He got my name and then asked, “We’re having trouble getting a third. Do you know anyone else who might want to play?”

Why yes I do, his name is The Good Man.

I vaulted back to the seats, waved over TGM. He followed with a puzzled look and I explained on the run that he was player number three.

We signed waivers (of course we did), were handed two baseballs and quickly enough were led onto the field at the middle of the sixth inning.

My player was Pablo Sandoval, catcher for the SJ team.

As I handed him two baseballs, I told him, “I wanna hear some breaking glass!” He laughed and said, “Aw, don’t tease me.”

This stout catcher can bomb down a runner at second, but he only needs to be “in the vicinity” to get ‘er done. So owing to that, mostly, he was unable to knock out a headlight.

TGM got Juan Ciriaco, shortstop. Juan has a hell of an arm, but not enough precision to smash a headlight.

As soon as it began, it was all over. There were no winners that day.

But there was ONE happy girl bouncing around, thrilled to have finally fulfilled the dream of getting the call to participate in Smash for Cash.

Later in the game, “my guy” Pablo Sandoval took one hell of a hit at the plate while trying to keep a run from scoring. So whatever grumpy feelings I had about not winning a dinner were long gone as he lay on the ground seeing stars. He won me back to his side in a big way.

I’m sure after that hit, he can’t even remember his name, much less the crazy girl with a grin on her face.

Thus is the way of baseball.

Here are a couple really amazing photos from this Flickr stream and this one too. This is a “right in there” view of the agony and ecstasy that is Smash for Cash. Enjoy. Check out the rest of both Flickr streams for views from Muni Stadium. 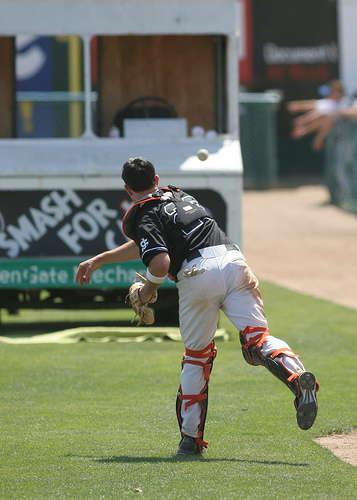 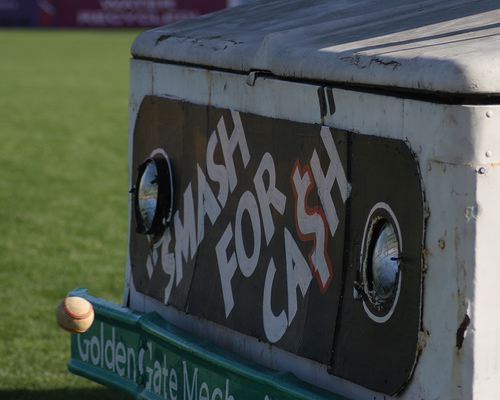 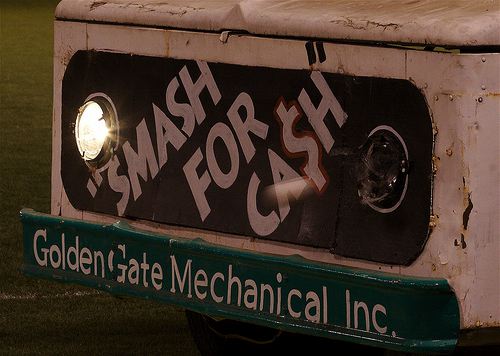