Look at me using a quarter word outta my nickel brain!

Just read an article in the Albuquerque Tribune about Albuquerque adopting those “hidden” cell phone towers.

City Councilor Councilor Don Harris plans to introduce a bill this month requiring the city’s cell towers to be of this new variety.

While I like the idea, and I do think it looks better on the landscape, I can’t quite get to the mental place of local recording studio owner John Wagner who said, “You just forget about it after a while,” in reference to a nearby tree cell tower.

We’ve been using these towers here in the Bay Area for quite some time and I have to say, they are not that natural. In fact, they tend to draw my eye MORE than the regular tower because my brain says, “something’s outta whack over there” and you look…and look longer.

One of the “pine” versions is installed way up on a hill as you go through the Grapevine on I5 approaching LA. I tried to see if there was a photo of that one online somewhere because, you know, you can find everything online. I struck out. This thing is perched way up on a hill, all alone, no other trees in sight. Every time I drive through there (which has been far too frequently lately), my eyes are magnetically drawn to that damn odd looking tree slash cell tower standing alone on top of a hill. I actually look at it MORE than I would if it was just a stupid silver metal tower.

I find them odd and no less an eyesore and I always think to myself “they aren’t fooling ANYONE with these things”.

That being said, I guess as one gazes out on the horizon, even though EVERYONE knows it is a fake tree it still looks a lot better than metal towers poking up everywhere. I don’t know.

A couple samples photos I found online are here. See what you think….. 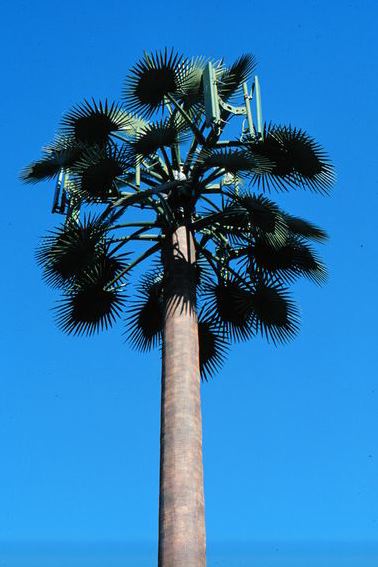 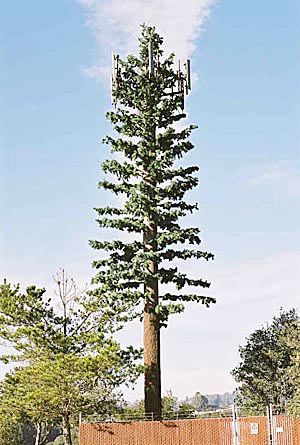