Every Holiday Needs a Song

But dooo you recaaaaalll
The most hated President of alllll?

Andrew Johnson, the first impeached president
Was not a really wonderful dude
And if you ever saw him
You would even say he blews (as a president)

Then one foggy April night
John Wilkes Booth came to say
Lincoln with your hat so tall
Won’t you go away?

Johnson was sworn in the next day
Now he’s the guy in charge
All his wishy-washy Confederate leanings
Crashed ahead on the country like a barge!

Two years later Johnson was impeached (unsuccessfully) for the first time. The next year, 1868, Congress made it stick, so buh bye Johnson.

He may not have done much with his time as commander in Chief.

But in his short rein, he did manage to buy Alaska.

So his legacy lives on…… 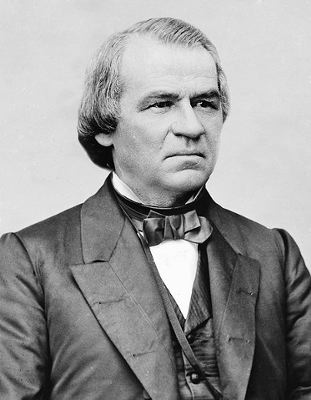 Photo and facts courtesy of the Andrew Johnson Wikipedia page.

Then it isn’t funny. Right? Or the saying goes something like that.

For the past couple years here in the Bay Area, we’ve been without a country music station. At all. None. Zero.

So yeah, I’m a fan of country. I’m also a fan of blues, rock, eighties, popular, swing, jazz, mariachi and mambo. It’s all good by me.

I really do like the old country stuff. I’ll admit that. Stuff I grew up on. I tend mostly to listen to the Roadhouse on my Sirius radio. They play only old music, and I love it.

But I also like new stuff. I’ve just haven’t been listened so long, I lost touch a little bit.

Recently I discovered that country music has returned to Bay Area radio, so now, every time I’m in the car, that’s all I listen to.

I’m getting caught up on what’s hot right now.

Every other freaking song is proclaiming, “I’m from the country! Oh yes I am, let me tell you about dirt roads and June bugs and mama’s apple pie! No, really, I swear to GOD I’m so totally country, you don’t even know!”

Example? Current number one country song? “Small Town USA” Oh and “Big Green Tractor” is on that list too. Both proclaiming that they come from the dirt roads and pretty green tractors.

Oh and recently I heard that song “Boondocks,” though I think that one has been out awhile.

But anyhow, to all of this, I say:

Blah, blah, blah all you yahoolios!

Did Willie ever have to let you know he was country? Did Merle feel he had to prove to you he could drive a tractor? Does *anyone* doubt that Dolly came from something real poor and made it big?

Give it a rest, you kids. If you have to say you are from the country, you probably aren’t. Folks tend to just know these things.

I blame Sarah Palin, by the way. All her chest thumping “I’m just a country girl!” while, you know, being governor and wearing $3,000 custom made suits.

If it were just a song here and there, I probably wouldn’t have noticed, but there is a glut of these “where I come from” songs. It is sort of repetitive and honestly, rather boring.

Plus, it’s all faker than a cowboy riding a broomstick pony with plastic spurs on his spotless boots.

Kind of like those “cowboy up” bumper stickers. Read my thoughts on THAT phenomenon in this post. 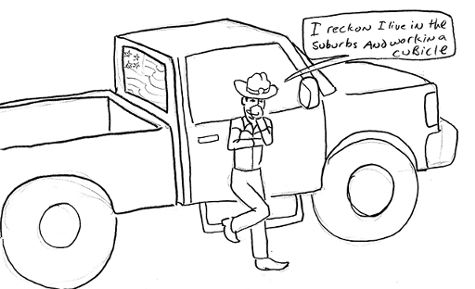 I know her. I’ve met her. I went to school with her. Worked with her. She was my neighbor. My friend. My sorority sister. At the market. The local WalMart. Friend of a friend.

Ok, not the exact woman, to be sure. But I know this woman. She exists in many forms. In many towns. In many lives.

I know this woman. When we were kids, she was the girl who was a little bit stronger, a little bit bigger and a little bit bossier than the rest of us. She organized us. Made us entrepreneurs with her Kool-Aid/bake sale/car wash moneymaking idea.

And we believed her ideas. In part because she was so convincing. But mostly because she’d punch us in the arm, hard, if we didn’t go along.

I know this woman. Her parents think the world of her. They brought her up competitive and strong. Her dad made sure she wasn’t a lightweight girl, but could stand her own with the boys. Her family took her to church and demanded she believe without question. And she did.

I know this woman. She did pretty well at school and even though she was kind of a bully, the teachers liked her because she was smart and worked hard. Teachers like someone who tries.

I know this woman. In high school, she was popular. Charming. Charismatic. And class president. We knew she would be a good leader. We knew because she told us so. And we believed her. Mostly because our arm still ached from the last time we’d dared to not go along.

She pounded her way up and down the basketball court, fiercely competitive. She’d take nothing less than a win because that’s how she was made. It wasn’t about the game. It was about winning.

Not being a loser is all that matters. Losers are weak.

I know this woman. She was the go to, the clutch player, the one you’d turn to when you were in a bind because she could deliver. And she did.

I know this woman. Some girls hated her. She hated them back. Openly. If challenged, she’d rise to the fight. She wouldn’t stop until she won.

And she won. Because to her mind, there is no other way.

I know this woman. In college, she was unique. People couldn’t quite place that accent. “Why would a girl from where she’s from talk like that?” But her out-of-place accent was actually part of her charm.

She and I pledged together, wore the white robes, raised our hands, said the words and joined the club. But her aspirations were higher than mine.

I know this woman. She was president of the sorority/captain of the team/head of the club in a flash and she didn’t lead, she demanded. She didn’t take kindly to anyone who didn’t believe in her entirely. Follow her unquestioningly. Punishment for not following the path she demanded was swift.

She’s the woman who cornered me, told me if I didn’t snap to, follow her ways, do exactly as she said, she’d throw me out of the club/team/party.

And so I complied. Because I don’t play that way.

I know this woman. She has beliefs. Strong beliefs. And will tell you exactly what she thinks about anything at any time whether it concerns her or not. Everyone else compares unfavorably because she’s the standard by which all are judged. And no one, but no one has got her beat.

I know this woman. I may not agree with her outlook on life, but I know her, and she can be a lot of fun. She can make me laugh, sometimes because she’s such a ham, and sometimes because she’s so damn backward. Her small town viewpoint applied to the big sky world, and anything that doesn’t fit her brick walled compartmentalized thinking doesn’t have a place in her world. Doesn’t belong. Should be gone.

Fiercely loyal to her family, her friends, her hometown. Almost blindsidedly so.

I know this woman. She doesn’t take no for an answer. I know her well enough to tell her when I think she’s in over her head. And she’ll listen because she likes me. Then she’ll punch me in the arm, hard, and tell me that I’m wrong.

And I’m wrong. Because her competitive side won’t ever let her believe she’s in over her head. That doesn’t apply. She always comes out on top.

I know this woman. No stranger to hard, backbreaking work, but also knows how to dress up and be pretty. She plays whatever game nets her what she wants.

I know this woman, and she’s not a manager, not a leader, she’s a “I’m going this way and rue the one who doesn’t follow me exactly.”

She often makes good decisions, but burns her followers in the process.

I know this woman. She takes the blame for nothing and is a master of subterfuge when the game’s on the line. And everything is a game.

Yeah, I know this woman. I’ve seen her. Her kids bully my own. She’ll tell me all the ways I’ve failed to live up to her standards and I’ll think “oh, that’s just her…she doesn’t mean it” when she treats me bad again, then steps on my neck to take another step up.

Because she only looks up.

“There is a special place in hell for women who don’t help other women,” says Madeleine Albright, former U.S. Secretary of State.

Sure. And if she needs help, I’ll give it. But I know this woman. She doesn’t need it. She certainly doesn’t want it.

There’s also a special place in hell for someone who likes or dislikes someone based solely on gender/race/eye color/hair color/height or a thousand other “things we’re born with and can’t change.”

And likes and dislikes equal votes.

I vote for the candidate that I, in my own humblest of opinions, think is most qualified. I vote for who they are by their own choices, not by genetic design.

Oh yeah. I know this woman.

And because I know this woman, there is no way in hell I can vote for her. 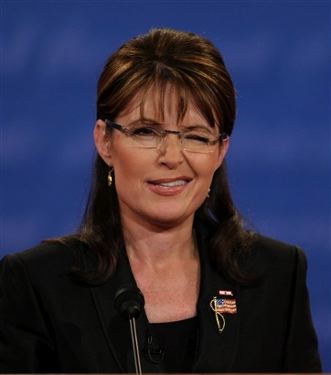