The Next Best Thing

Turns out world traveling makes me homesick more than ever for my homestate.

When I can’t pay my Fair New Mexico a visit in person, I have to go there in my mind.

A good book helps on that transcendental journey.

I’m a fan of books, always have been. I have to say that The Flamenco Academy (chronicled here a few days back) has really fired me up lately. I haven’t read a book in a long while that made me feel like there is hope for popular fiction. And that a book set in New Mexico was so well done makes me double happy.

So I know this has been covered plenty of places elsewhere, but here’s my top five list of the best works of New Mexico fiction. These are the books that, in my opinion, make me proud to be a New Mexican.

Without further ado (in no particular order):

This is a quintessential read for anyone living in New Mexico. It ranks not just as one of my fave NM books, but one of my fave books of all time. The main character, Josh is brought from Alabama to New Mexico by his parents and is introduced to the clannish people of Northern New Mexico, including the bully Chango. The scene where he and his buddy get liquored up remains a classic. I almost always quote from it when I, myself, tie one on. A classic, truly. And an easy choice for the list.

2) Bless me Ultima by Rudolfo Anaya

One of those books that gave me a wry smile as I read it. One of those where you nod as you read, thinking “yeah, that’s familiar”. Anaya is a beautiful writer and it is an honor to be a fellow New Mexican with a man of his caliber. This coming of age story is a nice contrast of old vs new, how Hispanic culture rolls into American culture in a way that is beautifully unique to New Mexico. It’s lyrical in the storytelling and a must read.

Yeah. This had to be here. You know it did. When I’m homesick I put on the movie to see the land as much as anything. It’s a salve for my soul, always. The book was a little tough for me to get through, but worth the effort. It really captures the feeling of that time in New Mexico in the 1970’s. It also captures a little bit of that magic that can only be found on My Fair home state. Milagro Beanfield War always takes me right back home, effortlessly.

A thriller about a group of spelunkers who explore a hidden cavern and discover a near extinct species of bear…who is none to happy to be bothered. Not a particularly great novel by most standards, but it does speak to a bunch of interesting things including a fairly detailed explanation about how the caverns, including Carlsbad Caverns, were formed. Both my parents worked for a while at the WIPP site, so this book also showed the ongoing battle of all the government agencies involved out there. DOE, Environmental groups, BLM and private interests do war daily and there is some discussion of WIPP in the book and how it may affect things in that geographic area.

My mom turned me on to this book and laughed at how true to life some parts of the book were portrayed. Working at WIPP left her a bit…scarred…so it was good for her to see it in print. Validating, you know? For me, it was a fascinating read and name checked a lot of places I know from living in Carlsbad, including some truly dive bars (including the one frequented by miners, ranchers, roughnecks and college kids. They stopped serving beer in bottles because there had been too many fights. But on a good night, the dancing was unbeatable).

5) Anything for Billy by Larry McMurtry

Ok, not technically a New Mexico book but about a New Mexico legend (Feh to the Texas town that claims ownership. FEH! I say!) and certainly New Mexico figures into the story. I am a massive fan of McMurtry and this is my favorite of all his books. He portrays Billy as a young, impulsive, spoiled, petulant brat. It’s fabulous. To me it was a fresh look at an old legend and to do that takes a talent that Mr. McMurtry has in spades.

You’ll note my list is strangely devoid of Hillerman books. I’m actually not a fan. My mom is an avid reader of his stuff. I am not. : shrug : I’ve got no issues with Hillerman, it’s just not my taste.

Lois Duncan is another author I’m proud to know is New Mexican. As a kid I avidly read all her stuff. Loved her writing and always got geeked out when we saw her at the Coronado Club at Kirtland Airforce Base. My mom would point her out to me. Her husband worked at Sandia Labs like my dad so she’d wait there (like we did) for her husband to get off work. Those were fun sunny summer days as a family. I tend to associate Duncan with that time in my life.

I know there are probably a bunch of good choices I’m missing, but for now, that’s my list. I reserve the right to add, delete and change the list as we go. 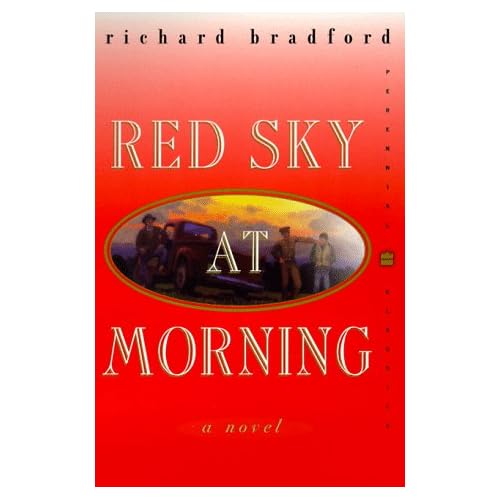 I Know Your Shame

This morning I was at my local Peet’s waiting on a latte when I noticed the line behind me was getting pretty long. Like out the door. Commuters were starting to get the angry eyes.

The guy behind the counter pulling coffee shots and making drinks was moving slow, and when he noticed the backup, he got a little flustered. The more he eyed the long line of impatient workday people, the more flustered he got.

Suddenly, one of the other people behind the counter went, “whoa! Ok, you work the register” and then she physically pulled the guy away from the espresso machine and shoved him at the register. The young man sighed, dejected, turned to the next customer and said “can I help you?”

The kid was put in the hot spot, the bottleneck, the key role….and he couldn’t handle it.

And I felt bad for the guy. Then I slipped into the Wayback Machine.

The year was 1990. It was summertime. My folks were living in Carlsbad, so I went back home to C’bad to spend my summer between semesters at NMSU.

My salt-o-the earth parents insisted that I couldn’t enjoy the summer break. I was required to get a job.

Times were a little tough in Carlsbad in that year. Many of the potash mines had closed and jobs were a little scarce. Any good summer job had already been snapped up, and that left me with only one place that would hire me.

I slipped into my double knit polyester rust colored uniform, pinned my name to my chest, and went to work slinging beans.

I had worked a cashier’s job in high school, and one of my coworkers taught me how to count change and keep my till balanced to the penny. The Taco Bell people loved me. My till always balanced, I was pretty good as customer service, and I kept the place clean.

Inevitably, the manager decided to give me a shot working on the drive thru window.

The hot spot. The bottleneck. The key role.

It started out ok, I guess. I was a little confounded by taking the order but not taking money right away and keeping track of which car owed what amount and which order came next. The line of cars started to back up. It extended out onto Church street.

I managed to give the wrong order to at least three different cars.

Some guy came inside the restaurant all pissed off and complained to the manager. Cuz, you know, his tacos weren’t right. Or something.

Anyhow, I was unceremoniously pulled off drive through and put back on front register.

It was clear that I’d failed, and my failure was Very Bad. My coworkers wouldn’t make eye contact with me. I’d once been a star employee. I was now disgraced.

I was never given another shot at my nemesis the Drive Thru. Never had another chance to prove I could handle it (not that I cared, honestly).

I made it through the rest of that summer working register and of course went back to Las Cruces. Classes began again at NMSU and over the years I graduated, got a job and lived my life.

Twenty years later, the embarrassment is still fresh. Another minimum wage employee has learned the humiliation of not being quite good enough to handle the hot spot.

I hope he gets over it quicker than I did.
.
.
.
.
Tangentially related, two years later, a F2 tornado ripped through town, injuring 6 people at the Taco Bell and ripping the bell off the top of the building.

The tornados in Carlsbad are the stuff of nightmares. My personal tornado story is well documented here. 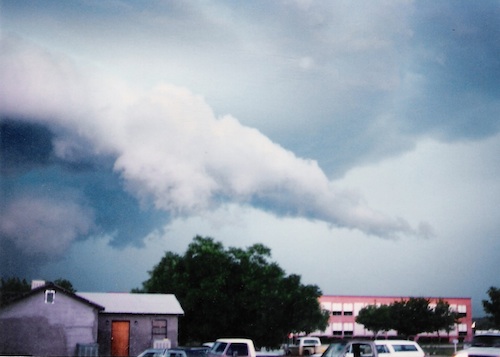 A short Google search, and lo and behold, a photo of the 1992 tornado. The Internet is a weird thing.