And that’s doin’ it right

And that’s doin’ it right

If you are a fan of any professional sport, major or minor in their designation, then over the course of your life, you’ve heard a LOT of renditions of the “Star-Spangled Banner”.

T’was written by Francis Scott Key and set to the tune of a drinking song. Where there is beer, oh yes, they’re playing our song!

And, may I quote from Wikipedia, “With a range of one and a half octaves, it is known for being difficult to sing.”

So much so, that large crowds will actually applaud a performer who can hit all the notes. That is a rare performer. Very rare, indeed.

In fact, over the course of my life, I’ve heard quite a few very, very bad renditions of our country’s anthem.

I’m not talking about local first grade choruses limping and wheezing through the tune or the high school marching bands galumphing and cymbaling their way along.

No, no I find those charming, actually.

What get’s me are the hand waving, trilling, note runs that many people (especially young ladies) try to throw in there to make you *think* they are hitting the notes, when they are, in fact, not.

I once heard a man at AT&T Park with a deep baritone voice who sang the song and dropped the highest notes of the tune down half an octave, and it sounded fine. Lovely, in fact, and we didn’t have to watch him struggle to hit impossible notes.

I find it’s the people who go easy with it and don’t try too hard that make it through all the ups and downs of the Star Spangled the best.

This past Sunday, just when it appeared the SF Giants vs Oakland A’s game was due to start, The Good Man and I saw a vision in pink descend the steps to the field and enter the grassy area, bowing low to allow her very tall Glinda the Good Witch crown to clear the gate.

“Oh wow!” I cried out, “It’s a performer from Beach Blanket Babylon!”

They are also known for their top-notch performers, so I figured this was going to be fun.

On this day, we were treated to a lady by the name of Misa Malone, a recent addition to the BBB cast, and she was out in full Good Witch regalia.

You know, it’s awfully hard to ignore a lovely woman in a huge fluffy pink dress and a bouffant pink wig. It was even harder to ignore Ms Malone who took her time with the Star Spangled and used her immense vocal power to master that difficult song from the first note.

I admired how she used her breath, taking in air in places amateur singers tend to over look, taking air wisely to get power to her pipes in time to hit those high notes.

And hit them, she did, which earned wild cheers and applause from the crowd.

I have to say, not only did she sing the you-know-what out of that very difficult song, she also *owned* that crowd of almost forty thousand people.

We were all paying rapt attention to every note, every syllable, every gorgeous smile she handed out like candy.

THAT is a true performer.

Wouldn’t you love to have the power to command a room, much less a stadium, like that…just once?

Had I managed to have a memory card in my camera (see yesterday’s post) I would have provided an awesome photograph of Ms Malone at the park.

Instead, you get a photo of Prince Charles looking very awkward with the BBB cast. To the far right is not Ms Malone, but it IS the costume she wore on Sunday. 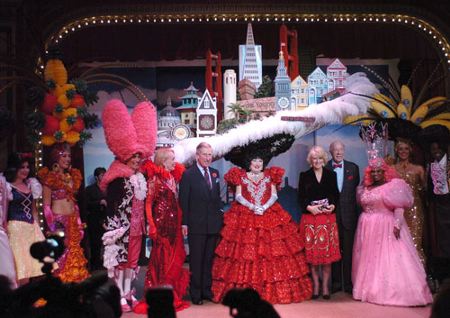