You’ll recall I first asked this question back in November.

The answer then was: persimmon.

Today, in my continuing quest to understand what in the sam hell is growing in my own backyard, I bring you the next installment in the series.

Ladies and Gentlemen…ask you. What exactly is *this*:

I have a tree laden with these little guys. The birds fight over the fruit that bears a color and skin resemblance to an apricot.

The neighborhood squirrels will come running up the power line, put their little paws together over their head, and swan dive into the tree to sample of these fruits. 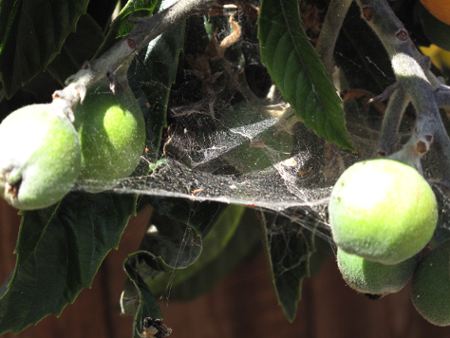 The bugs love this tree so much, a spider has moved in and built one hell of a web. This allows him to freely sample of the bug buffet. There are bug carcasses strewn all over the place. I haven’t seen a spider web like that since Hawaii!

The fruit on the tree looks a little bit like a small peach or a big apricot. But they aren’t.

Curious, I pulled one that looked ripe from the tree and split it open.

This mutant fruit has not one but TWO stones at the center!

Another I opened had not two but THREE stones!

I didn’t sample the fruit right away. The saliva-evaporating tannin in the under ripe persimmon I ate first and asked questions later taught me a huge lesson.

Nope, I was going to do some research before biting in this time.

With a little help of another overheard conversation between my landlord and his elderly father, I remembered them discussing the old man’s love of something called a loquat.

Hmm. Loquat. It sounds like a concatenation of a couple other words…like lemon and apricot. Or lemon and kumquat.

Is this one of those weird hybrid fruits? No. It’s not.

Loquat is actually an Americanized spelling of a Cantonese word, lou gwat, or the words mean “reed orange.”

This is another tree that is found mainly in Asian countries and was brought along to the Bay Area. It’s a very hardy tree!

Evidently the fruit has a mild sedative effect.

Evidently the seeds have a mild bit of cyanide. Yay.

Note to self: eat the fruit, not the pit.

So today I dove in like a squirrel and picked a couple ripe samples.

Ok, mystery solved! Off to find recipes for loquats!

Oh, by the by, I also have this creepy creature in my backyard:

It’s almost a foot across and it looks like it could devour small animals.

Fortunately, I know what this bad boy is….

It’s an artichoke that my neighbor grew and forgot to pick.

If it gets any larger, I may have to move.