An ode to the Conductor

An ode to the Conductor

On this sleepy Monday morning, I made my usual walk to the CalTrain station, The Good Man at my side.

As we strolled on the platform the northbound train rolled by. TGM commented how some trains seem to be quieter than others. We pondered why that would be.

Then I observed that sometimes on the train it is a smooth ride and sometimes it gets this side-to-side sway that is not only nausea inducing, it makes it read hard to read.

I wondered why that happens sometimes, but not always. Is it the track they use? Or do they take a corner too fast? Or what?

Without any good answers, I boarded the train.

Stalking up and down the aisles, I discovered there were no seats to be found. “Hmph. Busy day,” I mused to myself, then took up a standing position in the vestibule near the front of one of the cars (where the doors are).

There I stood with several of my fellow riders when the Conductor came along, checking tickets. I see this guy most mornings. He’s a hard case guy. I would guess he’s been on the train a lot of years and is nearing retirement. I can say this for the guy, he’s not willing to take any guff off of anyone.

Clearly, the overindulged Bay Area youth with their Blackberries, iPods and laptops impress him not at all. A meat and potatoes guy, he’s short and thick fingered with a boiler belly and his conductor’s cap worn firmly on his graying head.

So I stand there, riding the train, sleepily looking out on the passing world when the train picks up speed. Boy did the car start a rockin’ back and forth. And squeaking. A metal on metal sound.

I looked over at the conductor, he’s got a wide stance, both black-booted feet planted firmly on the ground. No need to hang on for this man. Me, I’m wrapped around the steel pole like a recalcitrant stripper, barely able to keep my balance.

The Conductor casually lifts his walkie-talkie to his mouth and says, “Can you bring this thing down about 10 miles? Car 4002 has side sway.”

The Engineer replies, “You got it” and noticeably the train slows. The rocking stops.

“Thanks,” I said to the Conductor, “That’s a much nicer ride.”

“Yeah, this car has real bad side sway,” he gruffs out in reply.

I nod, “thanks” I say again, then most of the people around me also give a “thanks”.

The Conductor continues, “This is only a four car train today, it’s going to be that way for a while.”

I nod, understanding now why I couldn’t find a seat.

“They took all the handicapped cars out, doing some retrofit I think. So since all those cars are out, any of the other cars are in service whether they need repair or not. This one needs to be fixed, but that won’t happen for a while,” he says, chuckling and shaking his head in a world weary way.

I nod understandingly, and give him that “what are you gonna do” shrug.

“It’s been a tough day, twice we’ve had doors get stuck,” he continues.

“Oh, they open fine, but they get stuck back in the mechanism and we can’t get them shut.” He shakes his head again. I nod again.

“And the handicapped cars, those are where we store the lavatory supplies. We have one bathroom on the train and there’s no toilet paper. We have to use paper towels. But you can’t flush paper towels so we have to put a yellow (hazardous) bag in there. And the sink don’t work. People are washing their hands with bottled water.”

“Ah well, it’s only downhill from there,” he says and shrugs, then picks up the PA mike and announces our pending arrival to Palo Alto.

He nimbly jogs down the steps off the train and onto the platform where a whiny kid approaches him saying, “The validator machine doesn’t work!”

The Conductor sarcastically replies, “What, OUR machines? I can’t imagine…”

He signs the ticket for the kid, makes his routine inspection at the stop, climbs back on and gets back to business.

All in a days work. 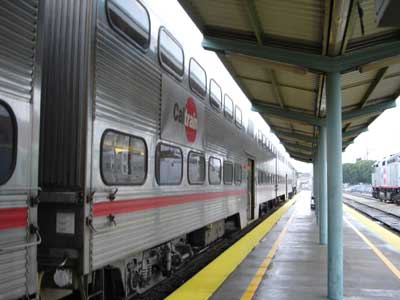