A View From The Inside

A View From The Inside

What follows is a real, true-to-life account of an interaction between The Good Man and I. This occurred last Friday while we were in the car driving northbound on highway 280. We were on our way to a celebration dinner with family.

I was feeling rather glum, not unusual at the holidays, and we had been listening to whatever holiday music was playing on the radio.

The station had chosen that hour to do all down beat music. This made me sigh with more glum-ness.

“Here,” said The Good Man, “I have an idea.” He dug around in the cubby of his car and produced a mix CD and popped it into the player. “If disco doesn’t cheer you up, I don’t know what will.”

And indeed, the up tempo disco beat was helping my mood.

Then the song “Boogie Nights” came on.

Because he is The Good Man, and as my spouse I can (and do) share almost everything with him, I decided it was ok to ask a question that has plagued me since I was just a young child. You see, I am old enough to remember when the song “Boogie Nights” was fresh and new and played all over the radio.

I loved the song even then and used to roller skate and shake my seven year old booty to the musings of the band Heatwave.

And so came my question.

“You know, I’ve always wondered what, exactly, is a Boogie Get Down?”

“Excuse me?” The Good Man responded.

The Good Man is much more worldly than me and I figured if anyone knew, he would.

This is when The Good Man gave me a head tilted “hmm?” look, much like a confused dog.

I continued, “Look, ever since I was a kid this has bugged me. Do you know what a Boogie Get Down is?”

He replied, “It’s an imperative, not a proper noun.”

“It’s an imperative. Dance with the boogie! Then go ahead and get down. It’s not a proper noun.”

Now I gave him the dog tilt head.

“There is a pause in there that I don’t think you are taking into account,” he said, trying again.

“Wait, you mean there is a comma in there? Dance with the Boogie comma get down?”

“But the way they phrase it you don’t hear it. Since Boogie Get Down comes after a the, it would imply a noun. I just assumed the whole thing was a noun because they don’t give you a pause which would indicate a comma exists in the lyrics. You can see my confusion.”

“They are musicians and are playing with phrasing and time signatures. Like jazz. You know.”

We were both quiet for a while as the rain spattered the windshield and the song continued on.

I noticed my husband had a slight smile on his face. I turned to him and said, “I’ve ruined the song for you now, haven’t I?”

Might I close the scene by saying this is what it’s like to live with me every day. The Good Man should receiving his Living Saint designation anytime now. 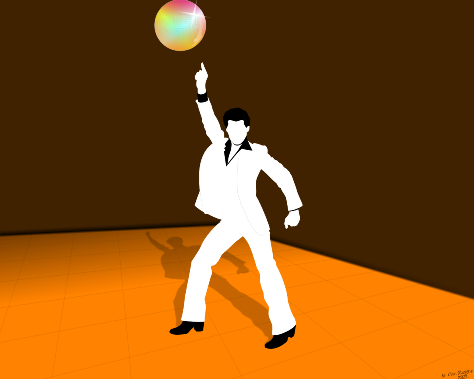 Image by Zerpx2k and found on Deviant Art and used here under the terms of a Creative Commons attribution license.