It would appear there is an internet meme going on lately concerning writing tips from classic authors. So far I have come across 10 Tips on Writing from businessman David Ogilvy and Henry Miller’s 11 Commandments, both very worthy reads.

Yesterday, I came across an article in The Atlantic titled 6 Writing Tips from John Steinbeck.

This is the advice that really resonated with me…which is odd because I have such a love-hate relationship with Steinbeck.

My first foray into Steinbeck was in High School where I was held down against my will and forced to read Grapes of Wrath. I *hated* Grapes of Wrath. Loathed. Jettisoned the book across the room in disgust more than once. I found it over the top, preachy and that alternating narrative about the Joad family interspersed with expository about the Depression and the Dust Bowl was dreary and overworked.

My next read was The Pearl, which I read grudgingly because it was Steinbeck, but I actually enjoyed in spite of myself. Then I read Of Mice and Men which I found to be a cruel, sad book, but the writing was solid. Then, because I liked the movie, I gave the book East of Eden a whirl and found it to be only so-so.

So I’d given Steinbeck a chance, didn’t like his stuff, and from High School on, I read zero Steinbeck. I wasn’t having it, unh-uh, no way.

I was vocal and insane about how much I WOULD NOT read Steinbeck.

Enter my multi-talented and fabulous cousin. Two years ago, he was in town and we went to Monterey to celebrate his birthday. While there, he asked if I’d ever read Cannery Row and I said no. Then I issued my overworked rant about Steinbeck.

Well that was that. If my cousin said try Cannery Row, then by god I had to try it.

I went to the library bookshelf and plucked the slim tome from the pile and gave it a read.

I loved it. Every word, every story, every character so utterly perfect. I really actually truly loved and adored a Steinbeck book. Magic!

So when I stumbled across Steinbeck’s writing tips, I paid attention.

My two favorite books on writing are Ray Bradbuy’s Zen in the Art of Writing, which saved my life during my first real and profound battle with writer’s block, and Stephen King’s On Writing (which my rock star cousin gifted to me, because he’s so right on like that).

The little list of Steinbeck’s advice is pasted below…this now goes in the favorite pile too. 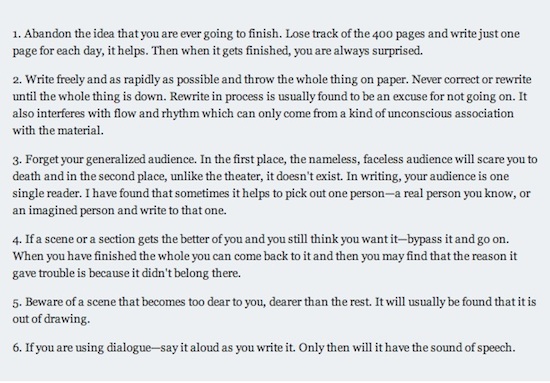