Had to smile when I read this bit today in the SFGate, the San Francisco Chronicle’s online home:

“On Upper Grant one recent Saturday, Mal Sharpe and his Big Money in Jazz Band were playing at the Savoy Tivoli, which has windows open to the street. When Sharpe sang out to a group of passing German tourists, reports Lucy Johns, no one responded. But their tour guide, Tara, said she was not only a guide, she was a singer. This spurred the crowd to demand a song. She sang ‘All of Me,’ and ‘we all swooned,’ said Johns. ‘Then she tromped off down the street with her bullhorn, leading the Germans to City Lights,’ said Sharpe.”


I love the visuals on this bit of North Beach storytelling. I adore Mal Sharpe, he’s a SF Bay Area legend, and one of The Good Man’s favorite jazz musicians. When you see a Mal show, you are completely engaged by his charm. So this story, inviting a passerby to come up and sing (and she knocks it out of the park), comes as no surprise to me.

It’s one of the many reasons why I love North Beach.

These kind of things just happen every day in San Francisco. It’s just how we do things…especially in North Beach.

Here’s another example. One night I was sitting at my favorite family-owned Italian restaurant called Sodini’s (it’s a North Beach icon). The restaurant was crammed and I was alone, so I manged to squeeze into a nice seat at the bar next to an older gentleman.

He and I got to talking when he offered to buy me another glass of Chianti. The man turned out to be Leo Riegler, current owner of Vesuvios, the world-known bar next door to the City Lights Bookshop where the Beat Generation used to drink and write and fight.

Leo has owned quite a few businesses in North Beach through the years. That night he told me about the coffeehouse he once owned (on the site that is now the Lost and Found saloon). I asked him about the bands that used to play there, as that coffeehouse was well known to host Jefferson Airplane, Grateful Dead, and more. He told me a long and involved story, the punchline of which was…

He used to pay Janis Joplin $20 a night to play his stage.

All this over a simple plate of ravioli and a glass a wine. Leo is a walking musical history lesson.

That’s just how it goes in North Beach. That scruffy guy in the corner of Caffe Trieste who looks like he just dragged in off the street? Probably a world famous poet laureate. That run down guy who looks like he’s about to pass out on the bar at The Saloon? Likely a multi-millionaire musician.

And then sometimes you just meet a random German tourist who can’t believe that his tour guide stepped in off the street, did a set with a local band, wowed the crowd, then kept going.

How beautifully inspiring. The Muse always does a little dance inside of me when we walk together up Grant street. It’s her fault I moved here, after all….. 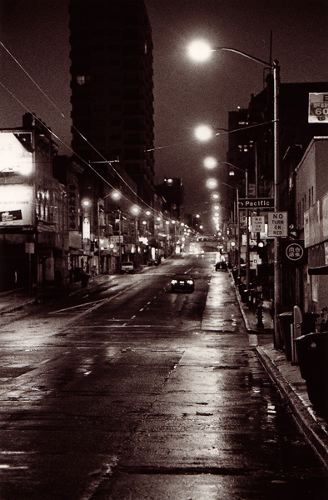