What Black Friday Means to You….

What Black Friday Means to You….

…means something else entirely to me.

November 25th isn’t just the day after Thanksgiving, at least not in my family.

Today isn’t shopping in my world. What this day means to me trends more toward apple pie. No, not pumpkin. Apple.

That’s because today would have been my father’s 80th birthday. He was a rather cantankerous fella, and he didn’t like celebrating holidays or birthdays much. He didn’t like cake either.

Ice cream worked just fine. And occasionally an apple pie. That was his favorite. A simple apple pie and vanilla ice cream.

Dad always got a bit of short shrift by having a birthday that was either the day of Thanksgiving, or right nearby. Since he wasn’t much of a holiday kind of guy, I guess that didn’t matter.

Never one to be deterred by crankiness, mom would whip up an apple pie. Then after we ate dinner but before bedtime, we’d each get a slice of pie with some vanilla ice cream. If we were lucky, the pie was still hot from the oven and the ice cream would melt and we’d eat and have something like a nice family moment together.

Not long after I moved to the Bay Area, my mom, dad and sister came to visit me in my tiny apartment. I made Thanksgiving dinner, the full spread, in my ancient kitchen. And of course, I made an apple pie for dad.

It’s at the holidays when tradition seems to matter the most. So even though it was sometimes a little rocky living in the house with the incredibly strong personality that defined my dad, having pie on his birthday is still tradition.

Today, while the world shops and fights over deals on big screen TVs, I’m a little quieter. A little more thoughtful.

I asked The Good Man if he wanted me to make another pie (we already finished the pumpkin pie from yesterday). He said “maybe cherry?” 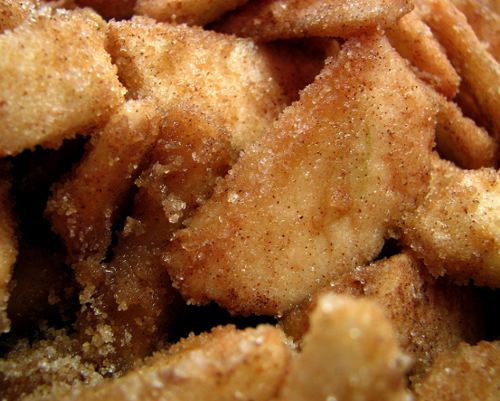 Photo by Crystal Woroniuk and used royalty free from stock.xchng.