Herewith, my list of my ten favorite quotes, in no particular order.

“Life is too important to be taken seriously.” – Oscar Wilde

I don’t actually read Oscar, or know much about him. This quote was told to me when I was in high school looking for a quote to go with my senior picture.

You know the drill, we all had to have a quote, our defining statement. I liked the sentiment, so I went with it. My alternate was something about describing the taste of an olive, it was a weird quote. So of course they used that one.

But the Oscar quote has stuck with me.

“Talking about music is like dancing about architecture” – generally attributed to Martin Mull, but source is unclear.

First heard this quote in the little known and way under appreciated movie “Playing by Heart“.

This was before Angelina Jolie was, well, what she is now. She was only sort of known back then and is adorable in this movie. Her character is wacky and everything I wish I could be (including six feet tall and drop dead gorgeous), and she talks about this quote (attributing it to a musician friend), then subs in that “talking about love” is definitely like dancing about architecture.

How many times, as a manager, have I wanted to throw a sack of bats at the feet of my employees and holler at them about being lollygaggers?

The answer is: a lot

“…and when we win this game, we’ll buy a keg of booze, and we’ll drink it to the Aggies ’til we wobble in our shoes…”

That is actually the actual words from the NMSU fight song. It always appealed to me greatly that at an institution of higher education, we were encouraged to, you know, drink.

Our forefathers from 1888 saw the future. They saw it clear. They knew exactly what my alma mater would be.

Makes me proud. : sniff, wipes a tear away :

“Hey, minion! Bring me a beer! And don’t lollygag!”

And by minion, of course, I mean The Good Man. (juuuuuust kidding!)

Speaking of those college days….how about:

“It’s only love when you’re loved in return.”

Ok, sure, it’s a quote from a Steve Wariner song.

But it was said with *meaning* by my best friend, back in college, when I discovered that the guy I’d been dating was cheating on me. It was my first taste of heartache. The guy was truly a cad.

Now that cad has been married to another friend of ours for the better part of twenty years. Proves that sometimes it’s not the boy, it’s just the wrong boy for you.

My bestest friend and I had occasion to recall this conversation recently, with a laugh. This was while recounting the story to my husband.

So all’s well that ends well, I believe.

And speaking of The Good Man…

“To my heart you have the key/It you who set me free/And time will surely show/That our love will grow and grow.” Lyrics from “Positively Meant to Be” by Jimmie Vaughan

The words on the page don’t really have the same impact as they do when heard on top of the low and slow blues guitar sound from Mr. Vaughan (brother of Stevie Ray, totally different style).

It’s a song I sing to my sweetie. I know, I know…too goopy for words. But it’s my song for, or rather about, him.

“No matter where you go in life after this, it will always be better than Tucson.” – From the movie “Hamlet 2”

Ok, apologies in advance to anyone from Tucson or anyone who actually *likes* Tucson.

I have had several occasions to spend time in Tucson. Not the least of which is that the Colorado Rockies have their Spring Training facility there. In the City of Tucson, I’ve been treated bad, eaten awful food, my friend had her car towed (from an unmarked area) and been lost in muther f-word “downtown” Tuscon with confusing highway markers.

And when, while watching Hamlet 2, they said that line, the beverage I was enjoying came rocketing out of my nose like Ol’ Faithful.

And just to prove I can be fair, I’ll also include:

Also a nose geyser line, spoken seriously and rather snidely by Kirk Douglas in the movie Ace in the Hole.

Ya gotta be from ABQ to understand it. But you know, there is a lot about Albuquerque that is just soooooooo Albuquerque.

“May the bird of paradise fly up your nose.”

If Little Jimmy Dickens wasn’t a poet, I don’t know who is. In fact, country music is ripe with quotable quotes. Country living and cowboys tend to have some colorful descriptors, but that’s a whole other post for another day.

Ok, ok, I’ll end on an inspirational note…or something…

“Feet, what do I need you for when I have wings to fly?” – Frida Kahlo

Beautifully painful and erudite, all at once.

I’m sure I’m forgetting quotes I adore, but can’t quite access in the ol’ brain matter today.

Maybe I need to go out and flap my yapper and make some quotable quotes of my own….. 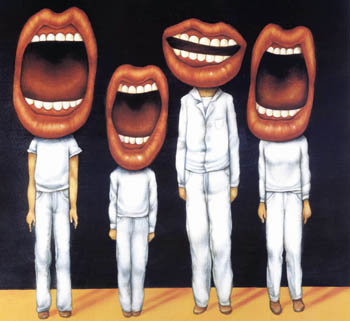