So you know this whole schoolyard game called roshambo, also known as rock-paper-scissors?

Yeah. I played it on the schoolyard. Years ago there was a lively night in Las Cruces where a drunk cowboy accused my best friend of cheating at rock-paper-scissors. She wasn’t cheating, he was just so drunk that his reflexes were slow, and she could see what was coming.

Plus, he kept throwing rock. Nothing else. Just rock. Sorta hard to sort out that strategy.

But that’s history. Let’s get current.

Recently in my internet wanderings, I read someone’s blog post discussing how maybe rock and paper and scissors aren’t the best choices in this game.

I wish I could recall where I read this so I could give credit. It was a quick piece, but for some reason the points stayed with me.

Ok, so basic rules, as we all know:

: cue the sound of squealing brakes :

What now? Paper covers rock and thus renders it ineffective?

Not so sure about that. I’m onboard with broken scissors and cut paper, but the logic doesn’t follow to paper covered rock.

I’m pretty gall damn sure that if I cover a rock with a piece of paper then huck that rock offa someone’s dome, it’s STILL going to cause damage. Paper has done *nothing* to render the rock useless or ineffective.

All I know is that in the heat of the battle I’m taking rock or scissors with me because no sissy piece of paper is going to save my hide! I need something with some heft!

This game has been flawed for YEARS!

So I propose some alternates. How about rock-scissors-machete?

Rock beats scissors since rock can smash the scissors.

Machete beats rock because a super sharp machete can either deflect the rock or maybe cut it?

Then scissors beats machete? Ok, this idea is starting to break down. Maybe scissors can cut the handle covering off machete thus leaving it very slippery?

Plastic explosives blows the bejeebus out of rock.

See. That works. And it makes a lot more logical sense. We can even keep the hand gestures the same. A flat slab of plastic explosives could look kinda like paper. It really works! 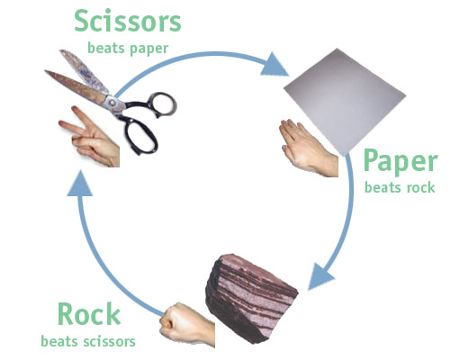 Image from Wikimedia and used under a Creative Commons Attribution-Share Alike 3.0 Unported license.

This week’s Theme Thursday was posted a day early, so I dove in. This week’s theme is “paper.”