This one’s for the pet owners

This one’s for the pet owners

Due to having a rather austere father, I am not one of those folks with deep, fond memories of the parade of pets I owned and raised as I grew up.

The Good Man is this way. Both of his parents are avid animal people and so he has a whole lifetime of pets he can speak about in loving tones. It makes me sort of jealous.

I have one childhood pet. A white cat obtained when I was about twelve.

She was a good pet, truly. Her name was Yoda and she was very tolerant of me (and that’s saying a lot for a cat). She had a fantastic personality, full of charm and easy to love. She would come when you called her name and was nutso over turkey meat.

Poor little feline breathed her last while I was away studying at NMSU.

In the span of my adult life, post-Yoda, I’d never owned another pet. Which is weird, because I’m a lover of fuzzies and usually form close bonds with the pets belonging to my friends.

My best friend is owner to my goddog and a finicky godcat and I love ’em like they are my own. But they aren’t my own. And they live in Las Cruces, so that doesn’t help!

So imagine my delight when I began dating The Good Man almost three years ago and he had not one but TWO felines to keep his life interesting.

One charming old man marmalade and one batty, toddler-esque black and white.

Sadly, the marmie gave over to kidney issues soon after TGM and I started seeing each other, but I at least had the chance to love that orange kitty. He was a good man.

Which leaves us now with the batty cat. She’s the one who charms our lives these days.

This is only the second pet I’ve ever personally owned. And I am here to confess:

I love that cat.

In fact, that’s the genesis of this post. I have one of those screensavers that plucks images from my photo library and displays them onscreen. As I was on the phone earlier today dealing with another cranky business client, this photo flashed on my screen and held there for a bit too long. 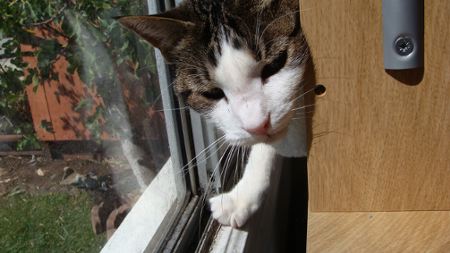 And I stared at that g’damn cat and felt so much love in my heart. Like…over love. Too much love. WAY too much love for such a cute furry obnoxious, middle of the night meowing cuz she’s hungry kind of animal.

Am I the only pet owner who has ever wondered…am I a little *too* attached to my pet?