Every morning after I wake up, stumble over the cat and yawn three times, I start to think about my day.

Part of that thinking involves devising a topic for my daily entry to this little ol’ blog.

Over the years, the topics have varied widely from news of the world to news of crevices of my mind. And food. Lots of talk about food.

So I thought quite a bit about what to write about today for this, my 997th post in the life of Oh Fair New Mexico.

I could write more about the really awful fire in San Bruno last night. About the stutter-stall from PG&E in addressing the situation, about the homes and lives lost.

I could go on a rant about the nature of mega-corporations (*coff*BP*coff*) and their inability to respond in crisis situations.

I could even write about the fact that my own employer is a way-too-huge corporation, and sometimes that worries me.

I might even wander out of my local area and riff on that wack-a-doodle “minister” (I use sarcastic quotes on purpose) who is so filled with hate and not a small amount of insanity, that he would endanger the lives of people around the world and American military troops just to get a little publicity for his wack-a-doodle 50 follower church.

I seriously considered discussing the conversation I had this morning with my boss, who is here in the US for three weeks, but who usually lives in London. He is a very kind, gentle and mellow man. He said to me this morning, “I don’t understand this man who wants to burn the Quran. Can you explain it to me?” I couldn’t. It is beyond my grasp.

I could discuss my growing dread regarding the upcoming California governor’s election in my state.

Or my belief that on both sides of the political spectrum, our US Congress has run so far off the rails that I’m unsure how we will ever find our way back.

And I could talk about how, really, this must be end of days because I can’t fathom this world where being so rude, being so self-centered, and being so utterly oblivious are acceptable. And yet, it is.

I even considered discussing how I’m what is considered a very sensitive person. In fact, there are books written on this subject, “The Highly Sensitive Person” and such. And because of that, how my choice to watch a blazing fire on my television all last night is really NOT good for my soul. How tweaked out I am about this whole thing.

Yes. I considered all of those topics and more.

But it’s Friday, and I’m exhausted. Three weeks ago one of my dearest friends died and I still can’t seem to climb up out of that grief.

And watching people lose their homes and their lives last night really did me in.

So today, I’m going to talk about a dog.

My first god dog, a heeler and Chihuahua mix, has been a good dog. She’s deaf and near blind and still very sweet. But she doesn’t run around and chase the ball like she used to.

My second god-dog is an adorable little beast. I’m not good with dog breeds, but I think he is a boxer. He’s a big, muscular dog with a menacing bark.

But he’s the sweetest little pea-pod of a dog I’ve ever known.

And he likes his godmom back.

There now. Let’s not think about the jacked up things in the world.

Look into those eyes. Doncha just feel better basking in the glow of this little bubba of a dog?

I know it makes me feel better.

Everyone just pat a cute dog on the head and love your neighbor and hug your family.

And let’s all have a nice weekend, ok? 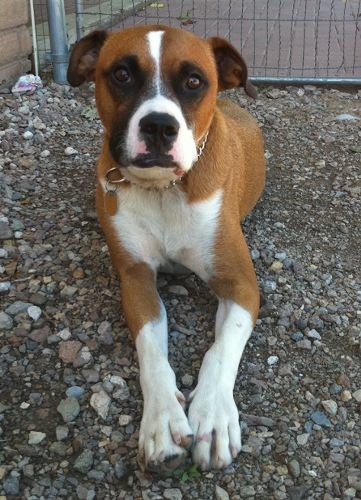