Simply put, people are *so* happy to get here and *so* cranky to leave.

I just spent forty-five minutes in the security line being herded like something less than cattle and stifling the urge to moo.

Granted, it is my fault for choosing to fly home on a Sunday.

I had a brief flicker of a thought while shuffling my feet and trying to contain my crowd claustrophobia. Back in 2001 after the terrible events of 9/11, I remember the pleading from politicians, famous actors and our President to not let the terrorists win. They asked us to go about our business. They asked us to continue to fly.

I know there was a sharp downturn back then. It was all over the news. I love to travel but was disinclined to fly when just five months after that awful day I flew to San Diego, and was greeted at security by a gentleman from the National Guard with a loaded M16 and his finger on the trigger. A lot of folks were disinclined to fly that year.

Today, looking at the shoving throng trying to get through the squeeze chute with shoes off and ziplocked liquids held high, I realized that here, some six years later…they didn’t win. I can’t attribute this to some overblown notion of patriotism or the enduring spirit of Americans. I can mostly attribute it to the fact that we all love to have a good time and aren’t about to let a little (ok, really really big) kerfuffle stand in our way.

By god, those damn “evil doers” cannot take away our freedom to go to a schlocky town filled with expensive shows, tacky clothes, naked women and cheap frozen margaritas by the yard and blow all our hard earned, middle class dollars on penny slots that cost a couple bucks a pull.

They can’t stop us from dressing inappropriately, drinking too much, sleeping too late and putting “just one more” twenty into the machine because you know, just know it’s going to hit.

They can’t take away our right to have fun.

And that is the American way, now isn’t it? The freedom to have a good party. 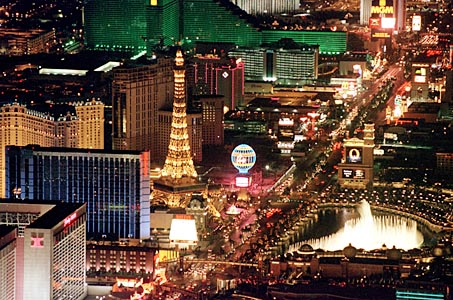