Earlier today, in a meeting at work, one of my teammates was given a gift from our clients. It was a really nifty wool stadium blanket.

Another lady asked to look at it, and when it landed in her hands, she brought it to her nose and took a good deep smell.

Just writing that…I know you know that smell, right? Nothing else smells like wool.

I smiled, because I was across the table and I knew exactly what she was smelling. I thought to myself about my own memories of the smell of wool.

Usually winter, outside, snowy day in Albuquerque (the only time it would be cold enough to wear a wool sweater). That perfect storm of smells combined, wool, a snowy day, a bit of sweat and the dirt on my mittens (that got there from making a snowball to lob, offline, at my brother).

So then this got me thinking about the deep associations made from odors, both good and bad.

But I was thinking about good…about the smells I deeply love.

The first that immediately came to mind was leather. I mean, unless you are a PETA advocate, who doesn’t love the smell of good leather?

Just that smell can dredge up lots of happy memories.

Like…the combined smell of leather and saddle soap you get upon opening the door to a tack room. Especially when I was taking riding classes at NMSU, because that tack room had rows and rows of saddles, all smelling nice.

Or…back when we first started dating, The Good Man had this black hard-leather jacket. It’s now too big for him and I think he recently gave it away, but I can easily remember that smell. Hugging him really tight, sinking my face into the shoulder of that jacket and inhaling deeply, tattooing the scent of cute boy and leather deeply into every single cell of my being.

Or, or….how about the smell of a new baseball glove? So many kids will get a new glove and spend lots of time with that thing firmly over the face inhaling. Nothing like that smell.

But I seem to be stuck on leather…

Oh, I know! So…up and down the peninsula here, they have tons of Eucalyptus trees. Early in the morning or very late at night (depending on what side of the nightclub you’re on), when you get the heavy damp fog, it makes those trees let go that very distinctive scent.

The moist, cool damp and Eucalyptus smell… when I travel somewhere else, and then come home, I always latch on to that smell first. It’s SO the Bay Area. Easily identifiable by anyone who has ever lived here.

Here’s an easy one for all the New Mexico folks…the smell of chiles roasting. Utterly identifiable…for miles. So reminiscent of home.

Summer rain on hot pavement. God I love that smell!

Sheets washed with Downy and dried on the clothesline. Haven’t done it in years, so who knows if it smells good anymore? Doesn’t matter, in my memories, it’s always fantastic. I think it helped being in NM because stuff dried really fast and didn’t pick up too much environmental yuck.

The soap and water smell of my husband just after he emerges from the shower. So delicious! (ok, that’s two about The Good Man, sorry!)

This is kind of funny, but how about the first time you noticed the distinctive smell of money? For me, it was after getting paid allowance for the first time with the kind of money that folded, not jingled. That dollar bill smelled like potential to me.

Aw, heck, I suppose I could go on all night this way.

I’m sure there’s some scientist who would explain how odors can make such vivid memories (like here), but I don’t need to know the science.

Right now, I’m sitting on the couch, watching a baseball game…thinking of how the yard smells on a nice July night like this. Garlic fries, hot dogs and marine layer. 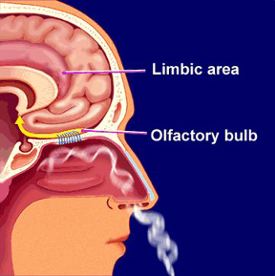