(You must know going into to reading this post that I’m something of an obsessively fanatical baseball fan…..)

Yes. It is end of days. Here is proof.

1) I am about to quote from and *agree with* something printed in the Los Angeles Times. : shudder :

In reading ABQjournal columnist Jim Belshaw’s blog, he pointed to this article.

He points to a recent incident. I’ll quote this article from the New York times for the details.

“The Yankees were leading the Toronto Blue Jays by two runs in an eventual 10-5 victory when Jorge Posada lifted a lazy fly ball to third base with two outs in the top of the ninth inning. Third baseman Howie Clark camped under it, but he backed off just after Rodriguez ran slowly past him.

Rodriguez said he shouted “Ha” as he passed Clark, who was fooled into thinking that the shortstop, John McDonald, had called for the ball. When Clark backed away, the ball dropped safely onto the turf for a run-scoring single.”

The Blue Jays are ALL KINDS of fired up. Saying Alex is a poor sport (and worse). Saying what he did is “bush league”.

To quote the venerable Mike Krukow, well known announcer and former pitcher for the San Francisco Giants, “any pitch that makes it across the plate for a strike is a good pitch”. Which is sort of a variation on “it’s better to be lucky than to be good” which is what I think happened here with ARod. It was buffoonish, yes.

It was FAR FAR more acceptable and less against the rules than the “bitch slap heard ’round the world” from the 2004 ALCS when Alex tried to strip the ball out of Bronson Arroyo’s glove.

Ok, so he employed a little leaguer tactic.

And worked well. Giambi came up next and got two more runs in. And the ailing Yankees won a game after a five game slide.

It worked. It’s not against the rules. So there.

Meanwhile the Blue Jays continue to cry like little girls. If I was a Blue Jays fan I would probably be freaking OUTRAGED and calling for ARod’s head and generally crying like a little girl.

But I have to agree with all of this quote from Bill Plaschke:

“I feel major league baseball has become a league of extraordinary babies.

It’s rude to pitch inside. It’s impolite to jog slowly around the bases after a home run. It’s unseemly to steal second with a four-run lead. Don’t you dare bunt in the eighth inning of a potential no-hitter.

And, apparently, never try to distract a player trying to catch a fly ball.”

Yep. There are a lot of unwritten rules in the game. But I agree that sometimes this stuff gets out of hand. Some of these “unwritten rules” are what make the game great. But some of them are also starting to tear it down.

Maybe it’s time to hearken back to little league games where you hear “heeeey batta batta” from the outfield. Maybe these guys making multi-kabillions of dollars need to lighten up and have a little fun again. I know it’s their jobs, but it’s also the national pastime.

Meanwhile, the Yanks are still 13.5 games out of first. The Blue Jays are ahead of them in the race and the Blue Jays took the series 2-1. So what do they have to carp about?

Meanwhile, I’m enjoying watching the fall of the mighty Yankee empire……if my team has to suck, they can too……

By the way, for the record, I agree with everything in Bill Plaschke’s column except for anything said by Tommy Lasorda….I can’t condone anything out of that piece of……….. 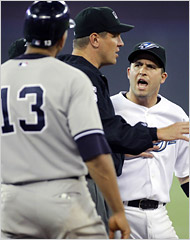