–noun
satisfaction or pleasure felt at someone else’s misfortune.

Yup. American society, in general, seems to love them some schadenfreude.

Some coffee fans get grim delight in Starbucks woes

I mean, if you say to me, “Well, I don’t really care for Starbucks coffee because it’s too strong/weak/bitter/strange for me”, then great. No one says you gotta like everything.

But if you say “feh! F–k ’em because they became so successful”…well that’s just mean. And elitist.

Starbucks used to be the low-down cool thing. It used to quietly be the “in” thing, where the coffee snoots went for a cuppa and conversation. Starbucks was filling an unfilled need. Or they created a need.

That is capitalism at it’s finest!

So suddenly they go from being good to being dirt because they are worldwide? And making money? So neener neener now that you’ve come upon hard times?

As a Starbucks stockholder, I see this retrenching as a good thing, actually, for the long term health of the company.

It blows that people will be out of work and stores will pull out of neighborhoods, but I honestly believe “getting back to core competencies” is the right thing to do in this down economy.

Ah, that’s just me being rational again. I hate it when I get like that…

(note to my favorite New Mexico Barista: Hang in there friend!) 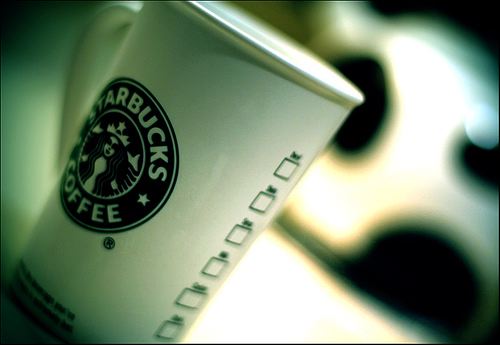