Oh, you knew it was gonna happen

Oh, you knew it was gonna happen

Wednesday’s ABQjournal has a story that was, in my opinion, inevitable.

Yup. Gas prices are so crazy. Recession is on. People have taken to stealing gas.

Are you surprised? Didn’t think so.

“Mark Hogan would park his box trailer over gas stations’ underground tanks, open a secret compartment and pump thousands of gallons of gas out of the ground.

Hoo, a good deal!! Bet it sells like hotcakes, too.

Dude sold it mostly to his friends and used the money to fuel his meth habit.

“The New Mexico Petroleum Marketers Association reported that 500,000 gallons of gas and diesel had been stolen from about 30 (Albuquerque) metro stations this year.”

And at $4 a gallon….I’m sure the $2M out of the coffers is but a blip on the petroleum screen…but I’m sure I know who will pay for this.

If you listen closely you can hear my wallet scream.

Remember back in the 70’s when people used to “pump and run”? That in response to gas shortages and high prices.

Oh well, these days you have to slide a card to get the pump to work anyway, so this is just the next “workaround”. 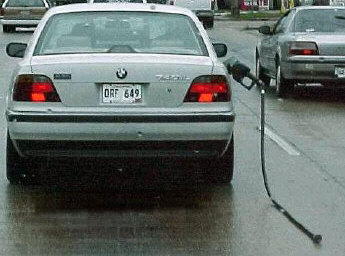