After spending a mind boggling sixteen days in another country working her arse off and also having a little fun, our Superhero returns to home base, Casa de Enchilada, for rest, relaxation and to plan her next move.

Lacking a blog post for the last week, it’s time to take action. However, jet lag, life lag and a lack of ideas has caused our superhero to be stumped.

“To the Random Word Generator!” she cried out. And thus it was so.


In one of those cosmic kinda “whoooah, I’m not drunk enough to understand the meaning of this” moments, I sauntered over to my favorite Random Word Generator this morning while looking for inspiration.

A kick start and kick in the butt for the Muse.

“Your random word is: Changeover”

Well shut my mouth. That about sums it up, doesn’t it?

The changeover. From GMT to PST. From rainy ol’ England to sunny ol’ Northern California.

From maudlin faces over England’s poor showing in Euro2012 and Andy Murray‘s loss at Wimbledon to holy hell YES the Giants put on a clinic at the 2012 All Star Game and then swept the Astros.

From the barking mad Mayor Boris Johnson to the stoic and reserved Mayor Ed Lee.

From cold sandwiches alone in a hotel room to vibrant dinners with The Good Man with The Feline trying to sit on my lap.

From a little lost American in London to a New Mexican in California.

Ah yes. The changeover is really a changeback. Back to where I belong.

Reunited and it feels so good. 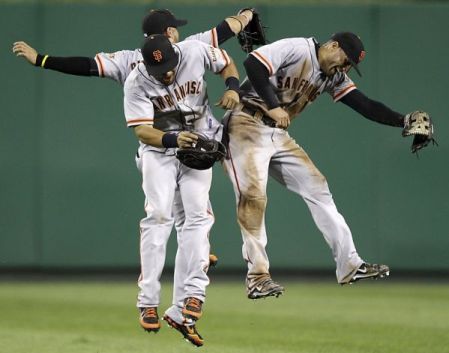