Ah yes, Lincoln County, a hotbed of conflict. Sure, the rancher vs storeowner battles of the 19th century were brutal.

But a bit of a war rages today, and there are no fewer guns involved.

See, growing up in New Mexico, I always knew there were certain places you just didn’t go if you weren’t from the community. Many of these kind of towns are sprinkled throughout the state, places where, if you aren’t from here, just keep on going.

This is rather well portrayed in the books “Milagro Beanfield War” where the young reporter is deposited in the town square and is summarily ignored, has rocks thrown at him and is put up in a small room with rattle snakes.

Or in “Red Sky at Morning” where a young Joshua Arnold witnesses a small town New Mexico Christmas ritual, and summarily gets his butt whooped by the locals.

This is not just the stuff of fiction. Nope, reading Bruce Daniel’s article in the ABQJournal, this phenomenon is alive and well.

See, it seems the good people of Lincoln County are a bit reluctant to be counted.

In the last government census (in 2000), only 39% of the people in Lincoln returned their information. The national average was 64%.

So when information isn’t returned, the census people deploy agents to the field to go door to door to make the counts.

And here is where things are getting sticky in Lincoln County. Folks don’t take kindly to strangers, particularly federally employed strangers, clomping about on their property. In fact, County Manager Tom Stewart went so far as to let folks know that “…some census workers could be perceived as trespassers and be shot.”

Not as a fear tactic, mind you, but by way of warning.

He’s not kidding, by the way.

Now, sure, getting a right count on the census may mean more in the way of federal funding and programs. But that don’t matter to the folks in Lincoln County who just want to be left alone.

Often, I think my fair New Mexico has grown too much, too fast. It’s not like it was, rapidly losing those rare and unique qualities. Then I read an article like this and know that there will always be pockets of people who just won’t change.

In a wry way, that makes me glad. And homesick. 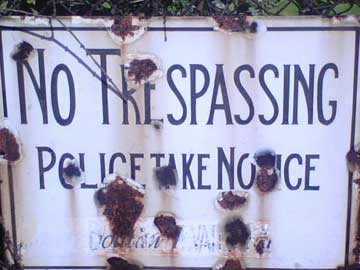