I have this friend. One of my best friends, actually, who is this little tiny bit of nuthin’. 90lbs soaking wet. She’s the sort of golden retrieverish person that will get up in the morning and go to spin class before breakfast, take an intense yoga lesson at lunch, and then go wind surfing for dinner.

But recently, at age 43, she’s found herself (happily) pregnant for the first time, and is very superstitious about this baby, so is, in her words, taking it easy.

Over dinner a few weeks back, my friend told me about this place she has been going hiking. “Oh, it’s great. They have a paved walking path, and it only has a few rolling hills. It’s great! I’ve been walking it a few times a week!”

Well, hey! To me, her elephantine friend who has been hitting the treadmill with vigor lately, “a few rolling hills” didn’t sound so bad!

Sunday I set out for The Dish, the landmark walking path on the campus of Stanford University.

Ok, fabulous. I got a much coveted parking spot, strapped on my shoes and off I went. The Good Man was up in SF with friends, so I was alone in this 3.7 mile mission.

I stopped by the ranger’s shack and he gave me a map, talked me through the path and off I went. Just to get to the trail, you have to walk up a large hill. Neato.

And so I get to the top of that first hill. Once there, you have to choose if you want to go clockwise or counterclockwise.

I looked to my left (to go clockwise). There was another steep hill. I looked to the right (to go counterclockwise) and there was a gradual decline. Hmm. So I decided I wanted to take the big hill at the first part of the walk while I still had energy, so I turned to the left and started walking.

And began gasping, sweating, became good friends with my heart beating out of my chest. I had to stop and put hands on knees multiple times (an elderly hunched backed woman strolled past me) and my lungs burned. Oh how they burned.

Ok, fair enough, it was a beautiful walk. I saw deer, many ground squirrels, and a red tail hawk.

I did manage to actually complete the walk. I scaled the last uphill before leaving and had worked myself into quite a sweaty, panting froth.

So, of course, I rewarded myself for a job well done by eating a pint of Ben & Jerry’s.

Isn’t that a pretty flower? I took a photo of it while lying on the ground crying out for dear mercy and sweet mother oxygen. 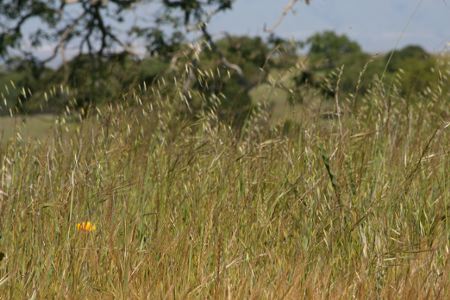