Ok, I suppose some things are hard coded into my system. Cellular level and all.

Today promises to be a very warm day where I live. I woke up this morning and it was already getting hot, and so my mind thought, “hmm, wonder if it is too early to think about getting the swamp cooler set up.”

And then I remembered…I don’t live in the desert anymore.

Oh and by the way, evaporative cooling doesn’t work worth a damn where it’s humid.

This all reminded me of when I looked for my first apartment in Northern California.

In Albuquerque I’d lived in a very large one-bedroom apartment up on the east end of Menaul. I was on the fourth floor and had a rocking view of the Sandias. Many of my utilities were taken care of, and I paid $550.

I was now looking at spending $1200 a month on a teeny tiny dark apartment in a crap neighborhood. And pay for it out of a salary that was only $5k more than I was making in Albuquerque.

Yeah. That was bad. But what I remember most was touring a pretty nice place that was in my price range (less than $1000 a month). It was clean, smallish, but suitable. It was a warm day down in the South Bay, and I inquired, “where is the air conditioner?”

The landlord responded that there wasn’t one.

I mean, to a girl from New Mexico, this is certain death! You don’t NOT have an air conditioner!!!

The landlord further explained that really, it’s not necessary. The really hot days are few and the wind off the Bay and the ocean keeps it cool.

Thirteen years later, I’ve still never lived in a place that had an air conditioner. Admittedly, there have been some still, hot days where I yearned for the simple beauty of a swamp cooler. On those days, I stay longer at work to soak up their climate control.

So while my home is a/c free, my car does have cooling. I won’t own a car that doesn’t, though I have friends who saved a few bucks by leaving that off. No way.

I have a vague feeling this is going to be a long, hot summer in the Bay Area where the tunnel of fans The Good Man sets up won’t quite be enough.

But then, when it gets that hot, the next day the fog rolls in over the hills and dampens the whole day and you freeze your tukhus off.

Ah…summer in the Bay Area. Swamp Coolers not required. 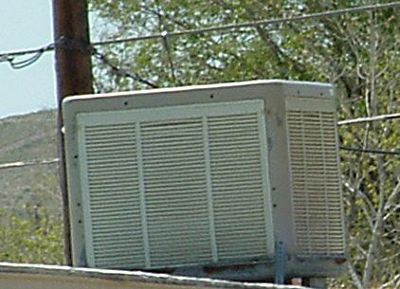