Last week the world witnessed what has now become something of a commonplace event, the launching of another Space Shuttle.

Despite the rather aging and ailing technology used to get the shuttle off the ground, it’s sort of amazing how well that ship has flown over the years. Yes, really well, even considering the two terrible tragedies of the Challenger in 1986 and Columbia in 2003.

As the shuttle Atlantis lifted off on July 7, I couldn’t help but be both proud and sad. Proud that another shuttle successfully made it to orbit. Sad that it’s the last shuttle to fly.

As a kid from the 80’s, the Space Shuttle program was something of magic and dreams and technology and good ol’ American pride. I loved to watch each and every launch and applauded as that little dot disappeared into the endless blue. Then several days later it would appear again and our astronauts would come home and by god, we did it again!

Remember when the shuttle landed in New Mexico’s own White Sands in 1982? I sure do. That was a good day, seeing my home state on the big stage. We got the shuttle and got ‘er home safe too!

Sadly, over time and two tragedies and budget cuts and over-administration, the proud NASA tradition has faltered, yielding way to private space programs and astronauts hitching rides with other countries who have the time and money to keep a space program running.

It’s the end of an era which makes me more than a little wistful.

The first shuttle launch, a ship called Columbia, in 1981. 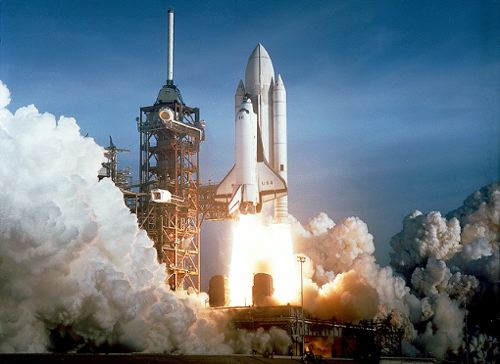 Reuters/NASA photo from The Atlantic Monthly.