Watch out for me. I am potent. I have powers even I don’t understand.

The power of mah mind.

See, on Monday, I went for a walk over at the Stanford Dish, a pretty grueling up and down hilly walk that knocks the wind out of me and makes me sweat. Generally The Dish humbles me very much.

It’s hard for me to complete the Dish. It takes effort. A lot of effort.

On Monday, I had to stop five times during the journey to catch my breath. It’s embarrassing.

Exercising at The Dish is rather popular with the beautiful and healthy people of the surrounding Palo Alto area (home to Stanford University, rich AND smart people), so as I go schlumping along, I often encounter blond, beautiful and much more attractive than me-type people.

So, there I was on Monday, a nice day, walking along in my old faded yoga pants, a loose shirt and a grimace. I’d already wheezed up the first hill and made my first stop as my lungs were burning.

As I continued to walk at an ok pace, I was passed by a young man wearing one of those shiny new tight, moisture wicking, Nike logo emblazoned shirts. He’d paired this with fancy running shorts, sparkling white shoes, fresh iPod strapped to his arm and the perfect runners stance. Hell, he didn’t even have the rictus you see on the face of most joggers.

No. He was a blond chiseled sample of running perfection. Elbows bent at the perfect angle, strides the right distance. All perfect. He passed me (wide, middle aged, out of shape) with a snotty air and as he cruised past me, he gave two dye job blondes with store bought boobies a long, meaningful look.

Ok, I’m not too proud to admit it. I got snarky. In my head.

Then he was gone over the next rise and it was me and the Bee Gees on my iPod shuffle. And another hill to climb.

So I trudged along.

Fifteen minutes later, I caught up to the guy.

He’d gassed out. He was walking. Slowly. I passed him. I didn’t even look his way. I just kept walking. Smugly.

Later, I encountered a woman who was really pert and fit. She was walking ahead of me on a hill where I had to stop twice. She stopped not at all.

“Well aren’t YOU so fit!” I thought in my tacky brain. “Bite me! Just….oooh, I hope you get tired! Oh no, you are soooo healthy!”

And when I finally got to the top of the hill, guess who I found standing there, breathing hard?

She’d made it all the way up the hill, but then had to stop.

I passed her too.

Oh the mind power of a snarky out of shape girl with determination on her mind!

I smited them down!

You know, I always thought that whole tortoise and the hare story was a bunch of bollocks. A story told to slow pokes like me to engender some sort of hope.

But maybe…just maybe, there is some truth to that fable? 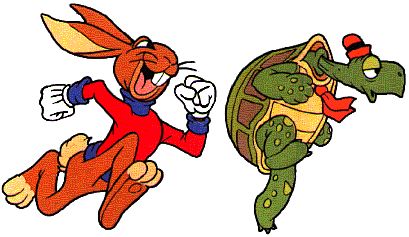