Goodbye to a Mentor

Goodbye to a Mentor

I was shocked earlier today to hear the news that Stephen J. Cannell, prolific television series creator and author, has passed away from cancer.

Last year I had the chance to meet Mr. Cannell at book signing for his Shane Scully novel, “On The Grind“.

That day at my local library, I was feeling especially low about my prospects as a writer.

After a fantastic talk with details about his journey from being a dyslexic child to creator of such shows as The Rockford Files, 21 Jump Street, and The A-Team, I wanted to ask Mr. Cannell if he had any suggestions for a better way to query agents with my own writing.

I waited until the entire line had gotten their autographs and no one waited to distract, then I walked up to Mr. Cannell, a Hollywood legend by anyone’s standards, and I boldly asked him my question.

What followed was not just an answer, but an almost thirty minute long conversation in which Mr. Cannell was supportive, asked questions, gave advice, mentored, guided and encouraged me.

At the end of the conversation, when his handlers were pushing him out the door, he took out a piece of paper and wrote down a phone number. He told me to call his office to schedule a continuation to the conversation.

I was beyond geeked out that he would be so generous. I tried calling and spoke with his admin several times, but given Mr. Cannell’s crazy hectic schedule, I was never able to speak with him again. No matter, the thirty minutes he spent with me will resonate forever.

Today I’m a bit saddened as I say goodbye to an intensely creative and prolific man who is, in many ways, both hero and mentor to me.

The best way I can honor him is to just keep writing. 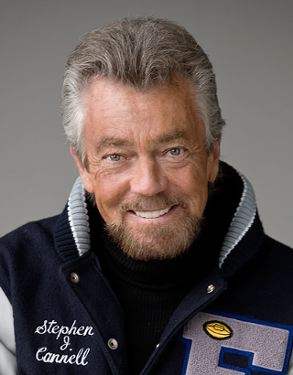