My whole life I have been endlessly fascinated with space and space travel along with the men and women who build the history and science behind space travel.

Call it a side effect of growing up in New Mexico.

As a fairly young kid I read the book “The Right Stuff” and ate up every word. So I read it again.

Just recently, I read the book yet again and I still loved every bit of it.

I’ve always been an especially huge fan of the early pilots like Chuck Yeager who were willing (on their small military pay) to strap into experimental machines just to see what they could do.

Can you imagine how insane people thought Chuck Yeager was when he was trying to break the sound barrier in a fast plane?

And he was, just a little. But his willingness to put his life on the line meant that scientists understood what body and machine went through at the speed of sound so that they could make better machines and better safety equipment.

Despite the enormous success of the US Space program, I’ve often wished that the military and NASA didn’t give up on developing pilot controlled airplanes to facilitate space travel. They were making good progress when the space race intervened and something had to be done quickly.

Instead of highly experimental planes, it was easier to strap an astronaut to a rocket and blast off. Hell, the solid rocket booster technology that fueled the last Space Shuttle launch in 2011 dates back to the 1960’s. And it still works. More or less.

Today with the sad decline of NASA and the growth of private space development, we may be getting back to the realm of real fast piloted planes as a way to get people up into space. As we start thinking about space tourism, the thoughts of safety become more important.

Enter the latest in a long line of courageous (and a little bit crazy) men. Yesterday an Austrian gentleman named Felix Baumgartner piloted a helium balloon to some 127,000 feet over the New Mexico desert (a record for a piloted balloon flight), and then he jumped out.

You know, just to see what his experimental spacesuit would do.

It was, first and foremost, a publicity stunt for Red Bull energy drinks. But there’s more to it than that. Mr. Baumgartner was testing a new pressure suit that not only protected his body but allowed maneuverability. Traditional pressure suits used in space flight don’t allow the astronaut to move around much which means in the event of danger it is damn near impossible for astronauts to eject and to survive.

So in his fairly thin space suit, Mr Baumgartner broke the sound barrier. With his body. On the same day, October 14, that Chuck Yeager first hit Mach 1 back in 1947.

When I first heard about this proposed jump from space, I thought it was pure insanity. As time went on I became more and more fascinated by the possibility of it.

Yesterday when I saw they were live streaming the event, I was all over it.

I have to be honest, I didn’t think Mr. Baumgartner was going to survive the jump. I worried that I was spectating a man’s death.

I don’t think I’ll ever forget that moment when he was standing there on the step of his capsule.

And then he wasn’t.

As his body tumbled and cartwheeled I was absolutely terrified. Well made airplanes have broken apart at those speeds. I thought that was it. I thought there was no way.

Then somehow he got control. His body righted itself and he was in perfect form and he was really doing this thing!

Then at just the right time his parachute deployed and he sailed down to mother earth. Feet touched ground and he took a couple steps and boop, he was home.

That crazy bastard. What an accomplishment.

And what a step forward for commercial space travel. 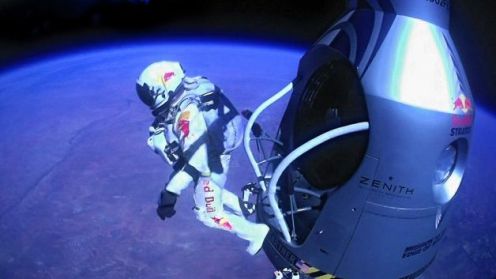