Ok, I’ve only spent about a day in Costa Rica, but here are my first impressions:

1) The customs process: all in not bad. Every bag has to be scanned for “agricultural products” but I didn’t mind. I had to do the same in Hawaii. I suppose when you are a small country that prides itself on wildlife conservation, this is important. Other than that, the process was stamp stamp and on your way.

2) I grew up speaking Spanglish. This means my Spanish is sparse and not very good. This gets me in trouble. Someone speaks to me in Spanish, I answer in Spanish. They continue, thinking I understand. I’m like “uh…hold up a second.” Whoops.

3) Almost everyone speaks some bit of English but it’s not always good English. Between my crap knowledge of Spanish and their few words of English…well, it’s a little rough.

5) Apparently Costa Ricans are opposed to sidewalks. There are really no sidewalks to be had. Everyone walks in the (narrow) street lanes. Everyone, including me. Thankfully the pace of life isn’t too fast here and neither are the cars.

6) Damn, they have a lot of Spanish channels on the television! Oh. Wait…..

7) Rain. Every day. Noonish. It cools it down a bit but also steams it up. To be expected, I think. Costa Rica is actually farther away from the equator than Singapore, but it feels a hell of a lot more tropical than Singapore.

8) But all that rain makes it really, really beautiful. The words “lush” and “green” come to mind.

9) A city at about 3,840 feet elevation. Surrounded by mountains and volcanoes. Originally founded by Spanish Conquistadors. Does San Jose, Costa Rica sound a little bit like any other city you know? Say…one in New Mexico?

10) The money has sharks on it. And another denomination has a buck (deer). And another has a cheetah. Rawr! That’s some awesome money! 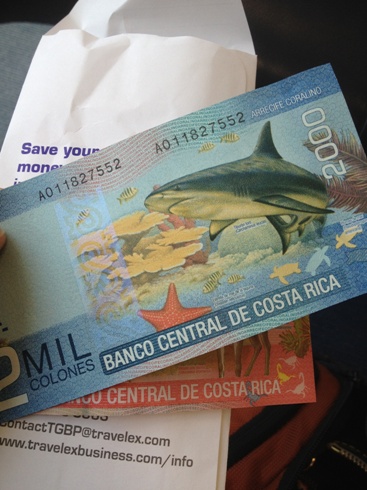