Do not mess with a Blues Queen

Do not mess with a Blues Queen

I think most Americans either tuned in or saw coverage of Inauguration Day, right? There was that tender moment in the evening where the President and First Lady took to the floor to dance the first dance. (if you were under a rock January 20th, click here for video).

The song the first couple swayed to was “At Last”, performed by, much to my dismay, Beyonce.

Now, I like Beyonce enough for who she is. The lady who brought the phrase “I don’t think you’re ready for this jelly” into the world. Oh yeah, and popularized the word “bootylicious”. Sure, she’s a bard for our times. Or something. She wearies me, but I have a few of her tunes on my iPod. I can’t hate on a lady who writes so much of her own music.

On that special day, however, I personally winced when the camera panned to B and she began warbling the Etta James classic.

I haven’t voiced this much because everyone I seem to talk with was like “OH! That Beyonce was SO wonderful!”

No she wasn’t. It was a special moment, but it was made special not by the singer (no way) but mainly by the sentiments of a kick ass song written by Mack Gordon and Harry Warren.

Given the exhaustion of our country with the previous administration, the notion of “at last” really resonated. It was the perfect song performed by the wrong singer.

I wondered why, on that day, it wasn’t Miss Etta up there. She’s still got the pipes and she’s still out there performing.

In fact, on January 28th, she was performing in Seattle at the Paramount Theater.

Where she said: “But I tell you that woman he had singing for him, singing my song — she’s going to get her a– whipped.”

Oooh, it’s ON now! And I believe the 71 year old lady could do it too, with one bejeweled hand tied behind her tiny back.

She went on to say: “She has no business up there, singing up there on a big ol’ president day, gonna be singing my song that I’ve been singing forever.”

Not sure what set Miss Etta off since Beyonce has been slinging her crappy rendition of “At Last” all over the place, including at least once in the presence of Miss Etta.

I think what galled *me* the most about Beyonce getting up there, was that it was a publicity stunt! Seems Beyonce is working on a movie called “Cadillac Records” in which she portrays Etta James. What a great marketing chance on the national stage.

Personally, though, I think Miss Etta is just ticked that Aretha Franklin got a shot on inauguration day and she didn’t. Just my two cents.

Speaking of Aretha, remember when Beyonce got into hot water with her too?

By the by, Miss Etta who has notoriously struggled with her weight is looking HOT right now thanks to gastric bypass surgery a couple years ago!

Go Etta!! Look at her tiny self! 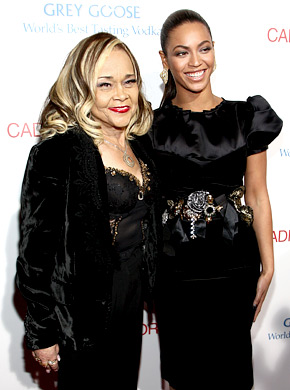