Back in April I had a chance to sound off about the kerfuffle involving the Georgia O’Keeffe Museum in Santa Fe and Fisk University.

Fisk is the owner of the Alfred Stieglitz Collection (O’Keefe’s husband) and since the university needs funds, they wanted to sell off a couple things. The museum made an offer and Fisk agreed to sell. Then the Tennessee Attorney General stepped in and said it wasn’t enough money.

Everyone stepped back, negotiations were had, and a new price was agreed on. Everything looked great.

Everybody was happy until one of the heirs to the Wal-Mart fortune (with scads of money, no doubt) decided she wanted the painting for an as yet to be opened museum being built in Arkansas.

Long way around the barn, since the museum has rights to the estate of O’Keefe they could have sued to take ownership, and Fisk could have lost the entire collection. A Tennessee judge actually thought the university should risk it. A big risk, I’d say, for a cash strapped university. Not only the cost of legal fees but the risk of losing a big collection. I’m dumbfounded.

In a move that makes me sad, but shows the nature of the O’Keefe museum, they’ve decided to back off. They see no need to punish Fisk in this whole process.

And in the end, no one wins.

Here is the painting again…the one causing all the fuss, “Radiator Building— Night, New York”: 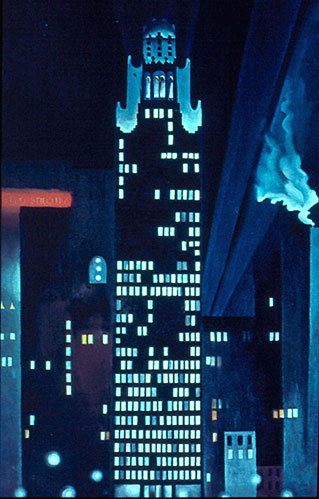 The high price of popular art

As an artist in my own way, it always hurts me to see squabbles over how to price the stuff of well-known artists. Recent mind-boggling accounts of auction prices for Van Gogh paintings come to mind….

You know, I’ve never been much of a fan of Georgia O’Keeffe, a shocking admission, I know, for a New Mexican. Actually, that’s not true. I think many true-bred New Mexicans aren’t real partial to her work and less partial to all the hubbub made about her stuff. It’s an out of towner, Santa Fe/Taos trying-too-hard art society thing and I’m just not in that groove.

Near as I can put the story together based on an ABQjournal story is that a deal was struck with the cash strapped Fisk University for the Georgia O’Keeffe Museum to buy the paining for $7M. That’s a nice tidy sum of money, actually. I don’t know what kind of funding the Georgia O’Keeffe Museum gets but I’m certain that’s a substantial chunk of change to try to bring Ms. O’Keeffe’s work back to the State of New Mexico. It was originally a donation to the university so now they stand to make some money, which works out great.

Since the deal was struck and approved by the Tennessee Attorney General (who looks over charitable donations and such), and I guess since news got out about the deal, there have been a variety of offers from art dealers and the like for substantially more money. Like around $25M. Wow.

This makes me sad on both sides of the table. Fisk University needs the money. The Georgia O’Keeffe Museum wants the painting for obvious reasons. Meanwhile I think the damn Attorney General is being greedy, and that makes me grumpy.

While this argument languishes in the courts, the school is still floundering for money, the museum is anxiously twiddling it’s thumbs, and the attorneys are getting their rocks off jumping up and down and getting paid by the bounce.

Boy does this make me steamed.

I, of course, didn’t know Ms. O’Keeffe but I’d bet she would be a bit steamed by all this too. She was, by all accounts, a humble woman. I’d like to think she’d like to do what’s best for both sides. In cases like this it’s hard to know what is best.

As a negotiator for a living, I’d love to see this one get settled without the courts. Could the university and the museum get together and agree on a new price? And could the frapping Attorney General just agree to abide by the deal they strike?

I say get them all in a room with coffee and bagels, cater in lunch, and let them hash it out. Good people tend to make reasonable decisions. Just keep that frapping Attorney General out of the room. You know how them law dogs tend to complicate matters…..

Anyhow, here’s to the memory of the artist, Georgia O’Keeffe. I’ll bet when she painted the canvas, the thought of a squabble over money never crossed her mind. Here’s to all the struggling artists of the world who’d give their eyeteeth for twenty-five bucks for one of their pieces.