When your back hurts…

It’s sort of hard to concentrate on much of anything else.

I hope to return from the haze of pain and pain killers tomorrow. 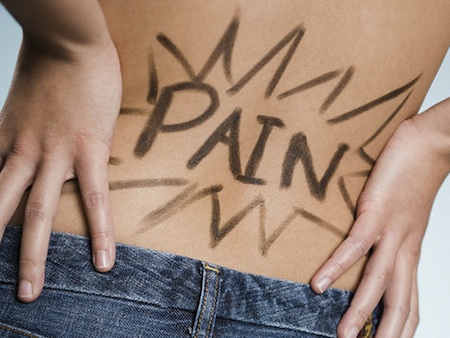 Image from Methods Of Healing.

So the good man and I lived quite a long time in our old apartment. The place was built in the 40’s and had a lot of quirks. Since it was an older house in an older neighborhood, we tolerated a lot of the less than optimal things, but was a fun place to live.

For example, we got pretty cruddy DSL service there. When I signed up for the service back in the early 2000’s, they woo’d me in with promises of 3mbps download speed and 1mbps upload.

So I called AT&T to complain. Often.

At the end of every year I’d call up again, crankier than the previous year. They would tell me that my speeds were “within normal range”. I’d say “but you sold me on 3!!” Then they’d tell me that my neighborhood wasn’t wired for any of the other faster services they offer, and “oh so sorry about that.”

Then I’d threaten to cancel my service.

So the call agent would send me to the Retention Department who would cluck and coo over my bad experience, then reduce my monthly rate. I’d gotten it down to about $20 a month for my meager 1.5 download speeds.

It was a breakeven. Not much money. Not very fast. So ok.

This month, we moved into a new place. I called them sonsabitches at AT&T and told them I was moving my service, and they weren’t going to raise my rates.

They told me “oooh….yyyeaaaah….um….your new building isn’t wired for AT&T. We don’t actually offer any service there at all. Sorry.”

Well ok. So I started looking at options.

Turns out lo these many years ago, the building owners used to provide basic Comcast cable to all tenants. But Comcast kept trying to bump up the price, so finally the owners said “go away” and the tenants had to pay for their own service, either Comcast or DishTV.

What that means is, the building was wired only for Comcast and AT&T phone lines. No one else. And no ATT DSL.

A little history: It was with sheer, unadulterated *glee* that I canceled my last Comcast service back in 2009.

Now they are my only choice. And I am peeved.

So peeved, that for the past week, The Good Man and I have had NO INTERNET in our little home.

Well, ok, we both have iPhones and get enought done using our 3G coverage. But basically….we’ve been living internet free for a week.

At first it was kind of nice.

And then it was extraordinarily painful.

And then it was nice again.

I have two loaner MiFi devices coming from two different cell phone carriers. I’m going to see if 4G mobile coverage will get us there. I’m not optimistic. My last evaluation of MiFi service wasn’t positive (great with one device on it, but slows miserably as each new device hops on).

And I am really not a fan of DishTV.

So here I am. Back at Comcast.

How possibly can I live in the middle of a very bustling neighborhood in the very *heart* of the most technologically interesting place in the world, and I can’t get simple, stupid freaking DSL service!?!?!

As an aside, I have to laugh at how reliant I’ve become on having my WiFi internet at the ready. Maybe I need to detox from it. Maybe it’s time to step back.

But then I want to write a blog post about how much I’ve broken my tether to the internet and I can’t because I have no WiFi.

I cried because I had no internet, until I met a man who had no iPhone. 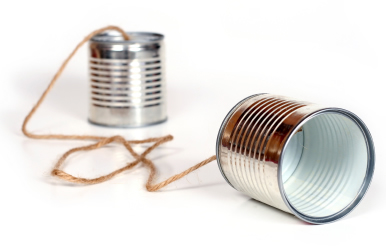 One of the amazing, fabulous, so-cool-I-can’t-believe-it aspects of our new apartment is a real, actual, honest to goodness wood burning fireplace.

However, since there are several units in my building, and who knows what sort of yahoolios I have for neighbors, today I called my insurance agent and double checked that I’m super duper double covered for such things as fire. And you know…burning.

Turns out that I am covered, and that’s good. I was raised with a healthy respect for fire. When my mom was just a little girl, her brother was using a burn barrel (or maybe burning leaves, I can’t remember) and he accidentally set several large farm fields on fire. My mom can vividly recall the huge flames and ever since she’s kept a healthy distance from any sort of fire.

So of course, my dad used to load up our 1970’s burnt orange free standing fireplace with lots of sappy New Mexico piñon logs. Then he’s say “what?” when mom mentioned that maybe that was a little too much fire for such a small fireplace.

I mean, as a kid I learned how to make a darn good campfire and over the years I’ve always really enjoyed cooking over fire (both bbq and camping), however, in my adult life, I have never lived anywhere that had a fireplace. Most apartments don’t offer this feature because the property owners don’t want to assume the risk.

Last night, I pondered while looking at this particular fire: 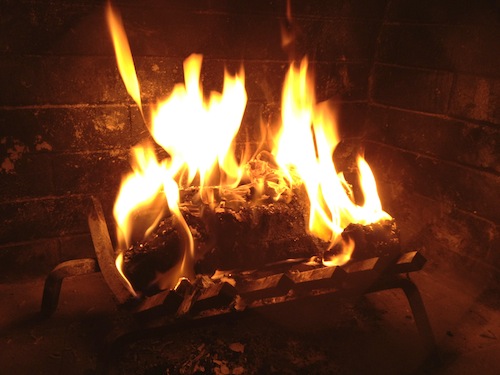 The first fire in our new place!!

For as much progress as we have seen in the world including technology, medicine, engineering, etc…meaning, of all the amazing tools that we, as humans, have at our fingertips, it’s still the tool of the caveman that can wipe the whole thing out.

One flickering flame. One spark from a burning fire is a lifechanger.

And so today, when my insurance agent asked me the all important question “what is the distance to the nearest Fire Station” and I answered “less than a mile,” at I first felt worry over having to even discuss the probability of tragedy. Then I felt thankful that the fire station is so close. Then I felt doubly thankful for all the people who work at that fire station and are willing, as a normal part of their job, to come and save me, and The Good Man and, yes, even The Feline, from a possible terrible situation.

Being a human is full of risks. Even if I choose not to use my fireplace, I can’t control all the others in my building. So yeah, I’m going to use that fireplace and I’m going to stand in front of it and warm my rear end. I’m also going to be very careful and very respectful.

Regarding the fire, the Feline says, “where you been all my life?”. 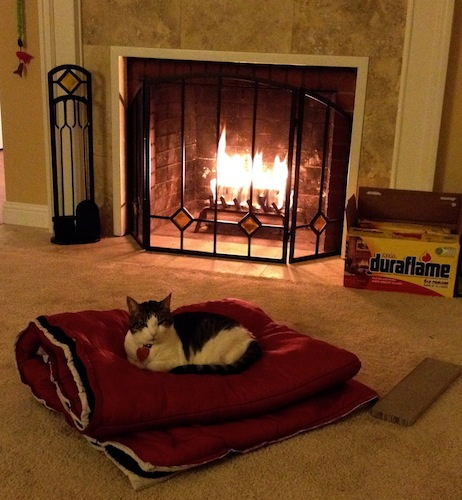 Yes, that’s a box of Duraflame. Real logs are on the way.

Except where noted, photos Copyright 2012, by Karen Fayeth, and subject to the Creative Commons license in the far right column of this page. Photos taken with an iPhone4s and the Camera+ app.

Photo at the link to the freestanding orange fireplace is from UglyHousePhotos.com. That is not a photo of my family’s home.

In This Technological Age

Considering how nomadic the people of the world have become – moving streets, cities, states, countries at a whim – you’d think the art and science of moving would have improved.

But really, it hasn’t changed much since the settlers moved west in covered wagons. It’s still just your stuff, a lot of cardboard boxes, a big truck and some muscle.

That’s it. No better. No improvements.

I need some razzle dazzle technology here, people. Can’t the finest minds in Silicon Valley and beyond get on this?

I’m talking about something like Star Trek transport. Push a button. Boom baby, your crap is at a new address.

Or levitation. Alakazam! Your sh*t’s in the truck!

Or wiggle my nose Bewitched style and it simply happens. Move house and cook a post roast, all in three shakes of a nariz.

Something better than boxes and packing tape rolls that always run out just at that crucial moment.

I say all of this as I take in the view at my home. Boxes everywhere. The Good Man and I wondering why we both have so much crap. Wondering if we can cull it down more. Wondering how in the heck we are going to get this all done.

Because perspective is a lovely thing, on Monday, I was chatting with a coworker who also has an upcoming move. We were talking about packing and shredding and donating and both of us were tut-tutting and shaking our heads at it all.

He asked me “how far is away is your new house?”

“Imagine being me moving 6,000 miles. To a new country.” (he’s moving from Dublin to San Francisco in two months)

So ok. He’s got to pack all his crap into wooden shipping boxes. Talk about space limitations! Talk about a man who could use an easy transporter.

Ah well. Hand me the bungee cords. Let’s get back to work. 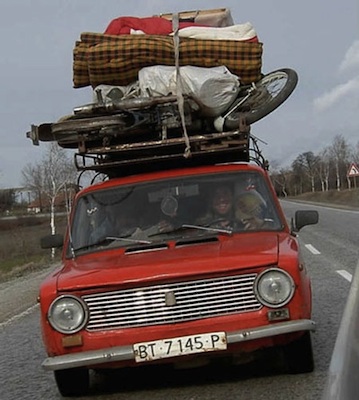