According to Wikipedia: “A camera obscura (Latin; “camera” is a “vaulted chamber/room”, “obscura” means “dark”, camera obscura = “darkened chamber/room”) is an optical device that projects an image of its surroundings on a screen. The device consists of a box or room with a hole in one side. Light from an external scene passes through the hole and strikes a surface inside where it is reproduced, upside-down, but with color and perspective preserved.”

According to me, a camera obscura is one of the fun, wacky, quirky things I discovered in my first tentative days living in the Bay Area.

Down at Ocean Beach, over by the Cliff House, there is a really wonderful camera obscura that was installed in 1946.

Just for whimsy, it’s actually shaped like a camera (the camera obscura was a precursor to pinhole cameras and the beginnings of photography). 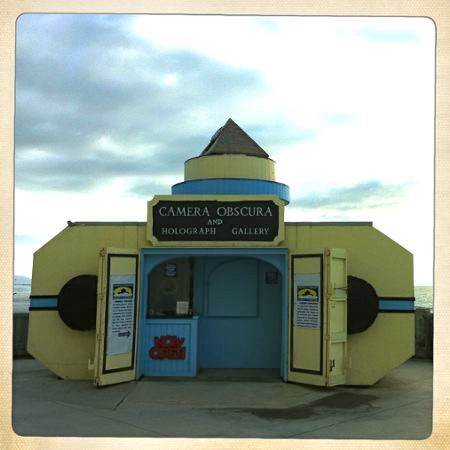 The little triangle mirror apparatus at the top spins slowly, so you get this really enchanting 360-degree view of the beach, Seal Rocks, and the surroundings. It’s all reflected onto this white dish shaped table in the center of the small, dark room.

Between the camera obscura and the Musee Mechanique, I could get lost for hours. Fresh off the highway from New Mexico, it was some of the coolest stuff I’d ever seen in my life.

When The Good Man and I paid a visit to the Cliff House this weekend, I was so excited to see the camera obscura is still there. It wasn’t open that day, but it’s there. And that makes me happy.

It was added to the National Register of Historic places in 2001, and is now under the conservancy of the National Park Service, so hopefully it will project on for many years.

The camera obscura makes me so nostalgic. I adore it!

That’s me. My purse was under my jacket, so that’s why my jacket tails are sticking out at such an angle. That and the fact that I’m simply a dork of epic proportions. 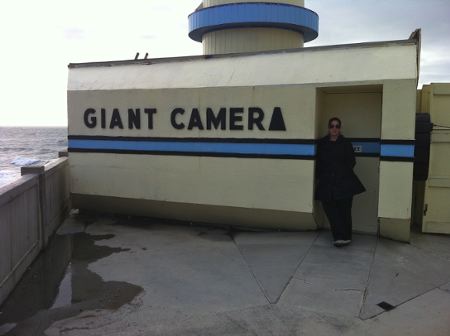 Photos Copyright Karen Fayeth 2011, and taken with an iPhone4 using the Hipstamatic and the Camera+ apps.