Buy me some peanuts and crack’er jack!

Buy me some peanuts and crack’er jack!

It is well documented that I am a HUGE fan of baseball. I am also a huge San Francisco Giants baseball fan.

Pick up any sports page in the past few years and you will know that my poor Giants have fallen on hard times. The once mighty team is barely a squeak on the baseball radar.

It’s tough. The big boys are off to a rousing 3-6 start. Starting off the season at the bottom of the standings, cellar dwelling has become the standard. That’s where they finished up last year.

I used to go to a lot of games with a good friend of mine. She had season seats up at SBC Park and it was a lot of fun. We have bombed out on CalTrain into the summer night to watch our team plenty of times. Hell, I even wrote a book about it.

A year ago, my friend gave up her season seats at the big club. Health issues and rising seat costs along with baseball depression at the hands of a struggling team forced her decision.

She invested that year in season seats for the Single A affiliate, San Jose Giants. It’s a little cheaper and a lot closer to home.

She is also a “host family” for a player. This is her third year being “mom” to a young player who makes max about $10k a year and needs a rent free place to stay for the season. It makes her happy. She gets to cluck over a twenty something kid, he gets to eat well and they both get to talk baseball with someone who really understands.

This year my friend approached me about her “grand plan” to buy up a whole row of seats in the section she likes at Muni Stadium. It is only five seats, but she began recruiting friends to pitch in on the seats in exchange for access to games. It makes her most happy to go to games surrounded by friends and family. So she did such good a sell job, I wrote her a check.

Tonight The Good Man and I get to go to the game as “season ticket holders” along with my good friend and bunch of other fun folks.

There is a whole different vibe in Single A ball. The players are young and hungry. They play for meal money and not much more. They *want* it. Humility is high. There are audience games between innings. The beers are only $3. Half price when the designated “beer batter” on the opposing team strikes out.

Yeah. Things are looking good in the minor league. 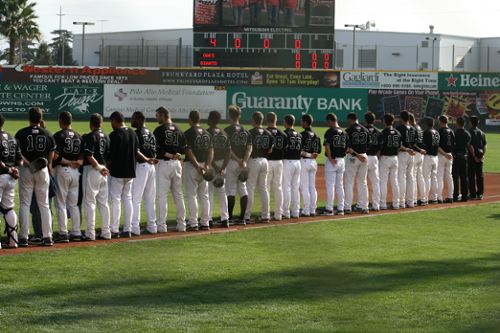