So under deeply dark gray skies and a relentless rain, I drove this morning down highway 101.

I had on the local country station because that’s the kind of music I’m listening to these days.

That fairly dated song by Tim McGraw “Live Like You Were Dying” came on.

“I went sky diving/I went rocky mountain climbing/I went two point seven seconds on a bull named Fu Man Chu
And I loved deeper and I spoke sweeter/And I gave forgiveness I’d been denying
Some day, I hope you get the chance/To live like you were dyin’.”

This song always did bug me. Dunno, I’m not the hugest Tim McGraw fan anyway.

But back in 2004, I really got a whole other view. I can’t hear the song without remembering.

I have this very dear friend, let’s call her Jane (it’s her Nom de Bebida).

Jane is about 90 pounds soaking wet and bouncy like a golden retriever. She is intensely athletic, too. I mean, despite being tiny, her body is finely hewn with long muscles and power. In other words, the exact opposite of my own rig. Which may be why we get along so well.

I once quipped that she has spin class for breakfast, power yoga for lunch and windsurfing for dinner.

And it’s true. That’s an actual day from her life.

Back in 2004 she went on a windsurfing trip to an island with a name I can’t recall. I believe it is part of the Canary Islands.

While there, she caught a particularly nasty parasite.

The side effects of this hitchhiker looked an awful lot like meningitis, meaning very painful headaches as the lining of the brain swells, utter fatigue, and more.

She went into the hospital and the doctors could not figure out what the heck was wrong with her.

For weeks she suffered. Huge doses of painkillers, doctors trying everything and still she didn’t improve.

At one point, they were unsure if they were going to be able to help her. Meaning…they weren’t sure if she would survive. They had a long talk with her boyfriend about options.

Finally after what must have felt like forever to our Janie girl, someone figured out the problem. With some meds and her own body’s immune system, everything kicked into gear and she started to improve, but recovery was very slow.

Once she came home from the hospital, she was told to rest. Rest, ha! You tell a golden retriever to rest? Are you kidding?

But she did rest as much as she could.

When she started to go a little stir crazy, I’d go get her and we’d go for short trips out to lunch or something. She’d fatigue so fast it was frightening to see.

Toward the end of summer of that year, Tim McGraw came to the Shoreline for a concert. Jane wanted to go, so I piled a lot of blankets and her tiny body into the Jeep and took her to the show. We sat on the lawn.

When the big finale came on and McGraw sang his top of the charts song, the crowd stood swaying and sang along. Janie and I sat on the ground and listened.

The first chorus rang out into the night air and my very down to earth, very blunt friend looked at me and said, “I don’t like that song.”

“Yeah, I don’t like it much either,” I replied. Then Jane startled me.

And I hugged her real tight that night, because she was right. I didn’t like her living so close to dying either.

So now whenever I hear that damn song, I remember my Janie girl demanding that she wanted to live like she was living!

By the way, just this year, at the age of 43, that girl got pregnant (naturally) with her first child and gave birth to the most delicate and beautiful baby girl.

Now if that ain’t livin’ like you wanna live, I don’t know what is.

I believe this sudden serious turn on the blog is probably a surprise after the past several posts.

It came as sort of a surprise to me, too, when I wrote it in my head this morning.

Blame it on my melancholy mood and the relentless winter rain. 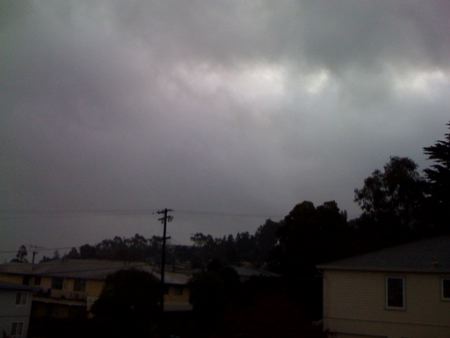